It seems Republicans may be willing to fight to keep prescription drug prices high.

The House Oversight Committee has been studying how drug companies set prescription drug prices.  Democratic Chair of the Committee, Elijah Cummings, requested information from twelve drug companies such as Pfizer Inc., Johnson & Johnson, and Novartis AG in January as part of a broad investigation into these practices.

Republicans, though, are warning drug companies not to cooperate with the congressional investigation.

In a report released yesterday, Republicans on the Committee have sent letters to the dozen CEOs of those major drug companies warning that the information they provide to the committee could be leaked to the public by Chairman Cummings in an effort to tank their stock prices.  Representatives Jim Jordan and Mark Meadows write that Cummings is seeking sensitive information "that would likely harm the competitiveness of your company if disclosed publicly."  They then accuse Cummings of "releasing cherry-picked excerpts from a highly sensitive closed-door interview" conducted in an investigation into White House security clearances.  "This is not the first time he has released sensitive information unilaterally."  Though they do say that they "cannot speculate about Chairman Cummings' motives," they relay that the committee should not pursue an investigation designed to impact stock prices.

The belief the investigation is focused on impacting stock prices seems to hinge on a quote from Cummings saying that he has three staffers he calls the "drug team" who work on the high cost of drugs and that their work has lowered drug company stocks.  The letter includes this quote from Cummings, offered at an appearance before the Committee on House Administration seeking an increase in funding for the Oversight Committee. "If you follow the headlines, we have already seen the impact they have had...on stock prices with regard to drugs.  I mean, it has been astronomical."

The letter, deceptively, omits the rest of the quote.  The full quote should read "I mean it has been astronomical saving the taxpayers money."  Without the last phrase, it seems Cummnings is bragging about the astronomical impact on drug stocks.  With the last phrase, it is clear Cummings is referring to the taxpayer savings.  Had Jordan or Meadows bothered to include more context, they would also see that Cummings said, just a minute later "Whatever you give us, we will give it back in savings by rooting out fraud, waste, and abuse."

All noble goals, and all things Big Pharma would rather not be revealed.

The impact of Big Pharma and its power over our lives is incredible.  It's reach is massively impressive:


And there are so many places to start here.

We could first talk about collusion and anti-competitive behavior in the pharmaceutical industry.  We could specifically talk about insulin, critical to more than 6 million Americans with Type 1 diabetes.  Between 2002 and 2013, drug makers Sanofi, Novo Nordisk, and Eli Lilly raised prices in lockstep.  Their insulin more than tripled in price to as much as $300 per patient, per month.  Closed-door negotiations between drug makers, insurance companies, and middlemen pharmacy benefit managers contributed to these outsize price increases.  This is classic price fixing, in violation of the Sherman Anti-Trust Act.

Then there's for the unproved medications with dubious benefits, like the prices for necitumumab, a lung-cancer drug. A study conducted before the FDA approval recommended that the drug ought to cost between $500 and $1,300 per treatment based on its likely benefit, giving patients only a few weeks of quality life.  Now approved, necitumumab costs $11,450 per treatment cycle.

Finally, there are also the rising costs on old proven drugs, like Acthar gel, a little known drug prescribed to treat everything from infantile spasms to the effects of Multiple Sclerosis.  The drug was approved by the FDA in 1952.  This drug increased from $1,650 to more than $24,000 per 5 milliliter vial overnight once the drug was acquired by Questcor in 2001.  By 2017, it was  $34,034 for the same amount. Acthar accounted for a staggering $1.3 billion in Medicare payouts between 2011 and 2015.

And that's just a sample.

Further, we also have to look at how many in Washington are in the pocket of Big Pharma, especially many Republicans.  We can look back at the issue in 2016 surrounding imatinib and Colombia's attempts to approve a generic version.  Imatinib is manufactured by Novartis.  In Colombia, the drug is marketed as Glivec.  The World Health Organization's List of Essential Medicines last year suggested that the drug was a treatment not only for chronic myeloid leukemia, but also for gastrointestinal tumors.  Currently, the cost of an annual supply is over $15,000, or about twice the average Colombian's income.  The Colombian Minister of Health Alejandro Gaviria announced plans that would eventually result in a generic production of the drug, potentially lowering the cost by 30%.  As a result, Andres Florez, deputy chief of missions as the Colombian Embassy in Washington, D.C. wrote letters about concerns of U.S. retaliation for such a move.  In fact, after a meeting with Senate Finance Committee International Trade Counsel Everett Eissenstat, staffer under Senator Orrin Hatch, R-Utah, Florez wrote that Eissenstat said that authorizing the generic version would "violate the intellectual property rights" of Novartis and that if "the Ministry of Health did not correct this situation, the pharmaceutical industry in the United States and related interest groups could become very vocal and interfere with other interest that Colombia could have in the United States."  Blackmail on behalf of Big Pharma.  Florez further worried "this case could jeopardize the approval of the financing of the new initiative 'Peace Colombia,'" an Obama administration era program seeking to bring together rebels and the government to end decades of fighting that resulted in the deaths of hundreds of thousands.

How about US congressman Tom Marino, who was forced to withdraw his nomination for Trump's drug czar when a report by the Washington Post and CBS's 60 Minutes highlighted his role in forging legislation that hindered the DEA's ability to move against drug distributors or pharmacies recklessly dispensing opioid painkillers?

Sadly it's not the most troubling aspect.  Now is the time for the question raised earlier.  Why do we account for 49% of the global pharmaceutical revenue despite only accounting for 7% of the population?

Because our country is specifically setup right now to benefit the pharmaceutical industry, especially in comparison to other industrialized countries.  The global average for prescription drug cost savings is 56% outside the United States.  We pay twice as much as other countries do.  That's the average.  For specific medications, the savings are even more extreme.  This has led 19 million American adults to import medication to save money.  That's 8% of the population.

Let's take for example a blood pressure medication.  One pill the doctors wanted me to take was Bystolic.  In the United States its $4.71 a 10 milligram pill.  In Canada, it's $2.36.  Still high, but much less expensive.

Why does this disparity continue?

Unlike in most industrialized countries, the United States government has no ability to negotiate drug prices with pharmaceutical companies.  The FDA is tasked with approving medicines based on safety and efficacy, but cannot consider cost or value in its approval process.  Further, there is no post approval process for negotiating or setting drug prices either.  Medicare was forbidden from negotiating prices staring in 2003 as part of the government's compromise with the pharmaceutical industry to get the Medicare drug expansion plan passed.  And unlike other countries, the United States government has taken no steps to interfere with the free pricing system.  In Europe, the government often sets drug prices with those prices dropping over time.

This leaves consumers unprotected, with big pharma possessing patent monopolies on drugs critical to patients' lives and health.  The companies then collude and engage in outright price fixing to set their profits as high as possible, and they're able to charge Medicare whatever they want.

The numbers bear this out.  Spending on prescription drugs has risen rapidly over the past decades, with new drugs and new specialty drugs in particular driving the spike. 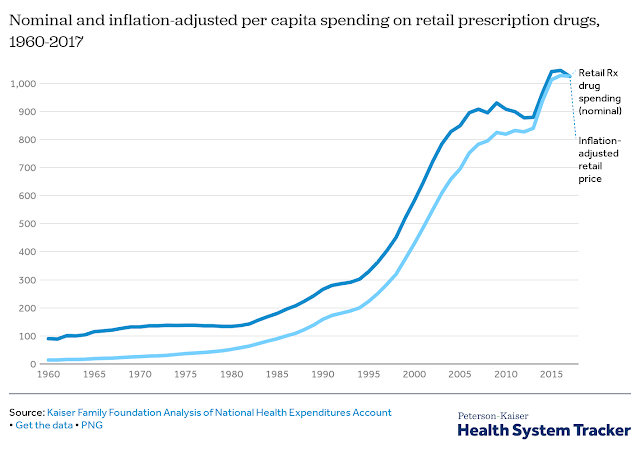 Branded drug prices have risen by over 60%.  Commonly used specialty drugs in particular have increased 57% since 2014.

You might say the hope is generic drugs.  After all, prices for generic drugs have dropped 37% since 2014.  And patents generally only provide a monopoly for 20 years (give or take with the Hatch-Waxman Act).  However, even some older generic drugs are becoming very expensive, owing to factors including drug shortages, supply disruptions, and consolidations in the generic-drug industry leading to outright monopolies.  One such generic had a 2,800% increase in price according to a perspective in the New England Journal of Medicine.

So, where do we go from here.

Thankfully, the fights have started.  The federal legislature has been looking to lower prices of prescription drugs.  Even President Trump has recently indicated that he is willing to work with Democrats to lower drug prices.  State level lawmakers are also working to lower prescription prices at their level.  And thankfully we have action in the courts, cases on insulin price fixing.

But we know that pharma will fight each of these measures and will fight hard.

We can only hope all our representatives will finally put their constituents above their pocketbooks.
Posted by Mitch at 6:00 PM