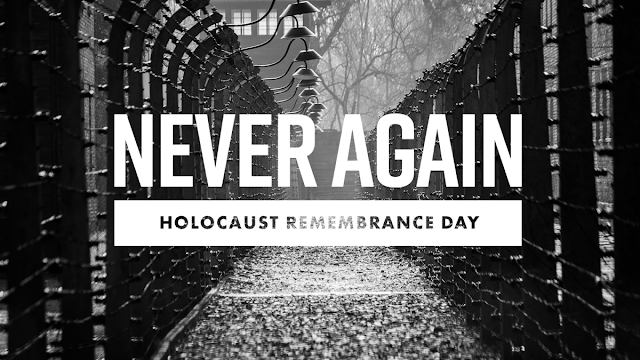 Today is International Holocaust Remembrance Day.  It commemorates the tragedy of the Holocaust, remembering the genocide that resulted in the death of an estimated 6 million Jews, 8.7 million Slavs, 1.8 million ethnic Poles, 220,000 Romani people, 250,000 mentally and physically disabled people, 312,000 Serb civilians, 1,900 Jehovah's Witnesses, and 9,000 homosexual men by the Nazi regime.  Honoring the anniversary of the liberation of the Auschwitz concentration camp on January 27, 1945 and the end of the Holocaust.

We remember and commemorate these events so that we never forget them.  So that we learn from them, for that is the purpose of history.  For us to be able to look back and see the events that led to such events and to be able to recognize them as they occur around us.

"The International Day in memory of the victims of the Holocaust is thus a day on which we must reassert our commitment to human rights [...]

We must also go beyond remembrance, and make sure that new generations know this history.  We must apply the lessons of the Holocaust to today's world.  And we must do our utmost so that all peoples may enjoy the protection and rights for which the United Nations stands."

The learning of history, the application, is sadly where we are falling down.  It's part of a bigger discussion of how we learn history, how we teach history.  Another big question for a future blog.  But on this topic, we can see the evidence around us of our failure as a society to completely grasp the lessons of the Holocaust.
Anti-semitism, though not at its highest levels, remains relatively high.  In the European Union, 89% of respondents that had identified as Jewish indicated that anti-Semitism had increased over the last five years in their country.  Further, 40% of respondents feared a physical anti-Semitic attack.
In the United States, the Anti Defamation League found that there had been 1,879 anti-Semitic incidents in 2018, slightly down from 2017, but still at a historically high level.  The New York Police Department has said that there have been more anti-Jewish incidents in the city in 2019 than all other crimes added together.
There are bright spots, reflecting a willingness, an eagerness to learn and to not forget.  The University of Southern California's Shoah Foundation features more than 52,000 Holocaust testimonies that are frequently accessed.  The U.S. Holocaust Memorial Museum had more than 1.6 million visitors in 2018, 93% of which were non-Jewish.
We still have a long way to go, though.  Only 11 states require that Holocaust history be taught in school.  This is reflected in the gaps in education of the current generation.  Among millennials, 66% of them could not identify Auschwitz, 22% of them could not confirm hearing of the Holocaust.  If you want an excellent film on why this is important, watch Denial, a historical film based on Deborah Lipstadt's work and case against noted Holocaust denier David Irving.
It seems history is more important to us than ever before.  If only we would listen.  May we never forget and may we ever be vigilant.
Posted by Mitch at 1:54 PM