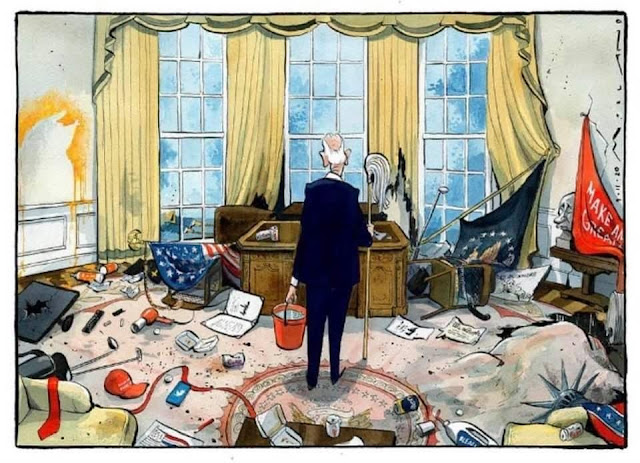 I’ve been struggling a lot the latter part of this week to put my thoughts regarding Wednesday’s attempted coup into words. And so much keeps happening, so much keeps being revealed this week that its been dizzying to try and keep up. In this process, I hit on two words that have kept repeating throughout the discourse I’ve witnessed over these past four days and ringing through my own head.

Each relate to unique sentiments expressed in virtually all discussion I observed regarding the events. First, that the events themselves were not a surprise. And second, that they do not represent us.

The first statement being an acknowledgment of the series of events that led to the insurrection on Wednesday. The second an attempt to assure ourselves that America is better than this.

One is a truth we must acknowledge, the other a lie, or at least a half-truth, that must be dismantled.

If destruction be our lot, we must ourselves be its author and finisher. As a nation of freemen, we must live through all time, or die by suicide.

First, inevitability. That the events of Wednesday, January 6, 2021 should not come as a surprise to anyone. They shock the conscience for sure. They are galling. They are horrifying in their implications. And we have valid reasons to be worried about the next several days because of them. But they do not come as a surprise to anyone who has been paying attention over the past five years.

The events of the insurrection were the natural result of the narrative that Donald J. Trump spent the last five years finely crafting. The victimhood and persecution of the conservative. His narcissistic personality disorder refusing to acknowledge any situation in which he could fairly lose. Before the 2016 election, he had already started the narrative that any election he lost would have to be rigged against him. Before he was even a proven candidate.

It’s something we’ve also seen before. Page after page, Trump followed the playbook of the authoritarian and dictatorial regimes that he so often praised. You know, the ones that have led to actual, successful coups.  So, once again, it’s not surprising to see a electoral loss followed by persuasion to strong arm tactics to maintain power, just like those political influences.

Further, Trump held sway over a fanatical base that was and remains willing to die for him.  He amped up a base that hung on his every word, with the fervor reserved for the most charismatic cult leaders (more on that tomorrow).  And like most cults, this one seems destined to end in a horrible spectacle.

We don’t even have to look that far back to see the greatest seeds of the sacking of the capital. Just go back to November 2020, following Trump’s projected loss. His calls to fight this to the very end. A refusal to concede or acknowledge defeat. Repeated lies regarding election fraud. Giuliani’s calls for “violence in the streets” and “trial by combat.”  Trump’s day of speech directing his soldiers to march on the capital. To keep the fight going.

Yes, the seditious attack on the capital was many things, but it was not a surprise.

O, yes,
I say it plain,
America never was America to me,
And yet I swear this oath--
America will be!

Out of the rack and ruin of our gangster death,
The rape and rot of graft, and stealth, and lies,
We, the people, must redeem
The land, the mines, the plants, the rivers.
The mountains and the endless plain--
All, all the stretch of these great green states--
And make America again!
Langston Hughes

Which brings us to the second sentiment. That those who perpetrated this heinous act do not represent us. That they are not America. That America is better than this.

Sorry, but no. That’s not true. Those who perpetrated this act absolutely are America. They are us.

At least a part of us. America is absolutely the great hope represented by the historic victories in the Georgia senate runoffs. The first African-American senator elected from Georgia.  Astounding that it has taken this long when you realize that Georgia has the third largest African-American population by count and by percentage.

But we are also the racist, anti-semitic, xenophobic, white nationalistic, anti-intellectual regression represented by storming of the capital. We are in this situation because we continue to try and ignore this part of our National identity instead of dealing with it once and for all.  We’re the infected patient treating the symptom but not the virus. The addict replacing one addiction for another instead of finally kicking the habit.

What we saw Wednesday is the result of never really dealing with the National sin of slavery. The result of prematurely ending Reconstruction to appease the Southern States directly enabling Jim Crow laws to be enacted and turning a blind eye to them. The result of the one successful coup in American history, in Wilmington, North Carolina in 1898, the replacement of a biracial governing body with a white supremacist one.  The result of following the landmark Civil Rights legislation of the 1960s with Redlining

The result of years of terrible history education in the South based on material that the United Daughters of the Confederacy approved as not harmful to the South, propping up years of belief in the Lost Cause.  This leads to the uncovering of of actual history being labeled as revisionism or fabrication.  All because too many people can’t let go of the myth.  Can’t let go do the lie created by a bunch of racists Southern white women.

The result of a country where largely minority peaceful protestors are tear gassed, shot with rubber bullets, and arrested in droves so the President can take a photo op, while largely white rioters storming the Capital seem to be let in the front door and have a handful arrested in response.

It’s a result of the perverse mix of religion and politics in America. Particularly within the Evangelical community. A unholy marriage that preys on the Evangelical persecution  complex to make gains for political power. That voice that tells us there is a War on Christmas or that still feels forced prayer in schools is somehow the key to saving America. The voice that tells Christians any minor inconvenience they experience in this country is persecution. The Religious Right accomplishing all the wrong things.

It’s the result of our cowboy mythology that tells us we don’t need anyone else. That we’re rugged individualists whose ultimate goal is to be free to do what we want. A perversion of the American dream that says that freedom is not being told what to do. And that any voice contrary is an assault on our fundamental freedoms.

It’s the inherent rebel nature of our country. Constantly in search of a rebellion worth fighting for. We started as scrappy rebels and still see ourselves as such. When we can’t find a just cause, we’ll settle for any cause.

It’s the result of identity politics that has convinced us that those across the political aisle are the vilest evil scum of the earth.  That thread that believes no Christian can be a Democrat.  That thought that Obama and Hillary were actual demons that smelled like sulfur.  That had bought into the idea that all our political leaders (or more specifically, the ones I don’t agree with) are in an elite pedophilia ring that controls the world.  Maybe it’s time to remember that they are just people, fellow citizens who happen to have different views about how best to improve the country.

This failed coup represents and will continue to represent America as much as those historic successes do. We are that combination of our millstones and our milestones. Our progressive leaps forward and our many regressive steps backward.

We are what we have always been, a country with the greatest ideals in the world, who most often utterly fails to live up to them.

Our choice now, is how we proceed. Do we finally address the scabs that Wednesday reveals?  The deep scars and healing that needs to occur?  Do we decide to live up to what America can be? Or do we continue to live in that paradoxical state in between?

That is what will be revealed over these next few days. It’s why there are certain actions that must be taken over the next few days to cement our path forward.

Republicans and conservatives must own up to the fact that this wasn’t Antifa, but it was a part of their base. The Antifa story was another outright lie and proven fabrication meant to once again mislead millions of Americans.  It was meant to once again provide that shield that this wasn’t us, it can’t be us, it’s someone else. No, it’s time to own up to it and to disavow it. Most have, but there remain several that are still trying to appease and appeal to the worst demons of our nature so they can jockey for position in 2022 and 2024. Enough.

Trump must be impeached and removed from office. It’s time to show that actions and words have consequences, beyond just being kicked off social media. This step is important to bar him from further office, to prevent his attempt to pardon himself and other co-conspirators, and to deny him the future privileges of his office. When you invite insurrection against the country your are in charge of, you shouldn’t get to continue to benefit from it.

It’s time to put aside identity politics.  To remember that we are all Americans. That there isn’t one right way to do this. That compromise isn’t always a dirty word, it’s most often how things actually get done. That we need each other to sharpen one another.

To remember our ideals and actually strive to live up to them.  Then, maybe then, we can start to heal. It would be inevitable.