Once Again, This Isn't How The First Amendment Works

Looks like 2021 is shaping up to be much like 2020.  Too much happening, delaying what I want to write about for what I need to write about.  And since it seems everyone has become a Constitutional scholar once again, I feel we need to have a discussion about how the First Amendment (and in fact, all of our Constitutional protections actually work).

For those who mercifully don't know, discussions of censorship and the First Amendment protection of free speech are popping up again because social media companies like Facebook, Reddit, and Twitter banned President Trump from their platforms as a result of Wednesday's insurrection at the Capital.  Tech companies like Apple and Google have gone further and removed or threatened to remove the social media site Parler from their app stores, unless the "unregulated" platforms put in some kind of content moderation.

This move has of course led to cries of censorship and a violation of the First Amendment Protection of Free Speech from those on the right.  There have been both calls to leave Twitter and to launch a Spartacus-like #WeAreTrump hashtag.  Hard to both leave and trend at the same time.

You can tell the Twitter ban particularly hurt Trump, especially when you view the timeline of his epic addict-like downward spiral yesterday.

It began when Twitter and Facebook immediately banned Trump on Thursday following his incitement of the protestors leading to the sacking of the Capital and the failed insurrection attempt.  Facebook's ban was almost immediately announced to be permanent.  Twitter's was initially a temporary suspension - a twelve-hour ban or cooling off period if you will.

Once his twitter was reactivated, Trump sent out two since deleted tweets.  The first looked to the future, the second addressed the inauguration.

Twitter decided in light of those two tweets and in light of Trump's half-hearted "concession" speech, to ban Trump indefinitely. 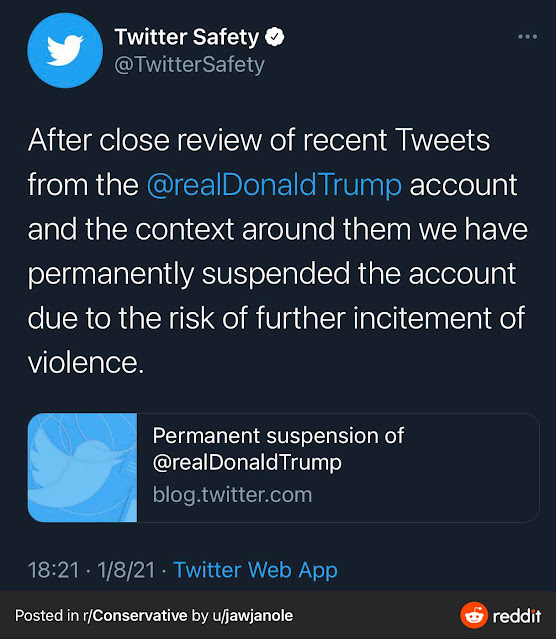 As part of Twitter's analysis, it feared Trump's most recent tweets were being interpreted as supporting the rioters and that plans for future armed protests had already been proliferating both on and off the platform, including a proposed attack on the U.S. Capitol and state capitol buildings on January 17.  They also feared that Trump's announcement of his intent not to attend the Inauguration could be seen as free rein to attempt a second uprising at the Inaugural event.
Trump took the banning as well as any toddler who has been told no does.  Which is to say, it led to a desperate meltdown.
Trump first tried to tweet via the official President of The United States Twitter handle @POTUS. 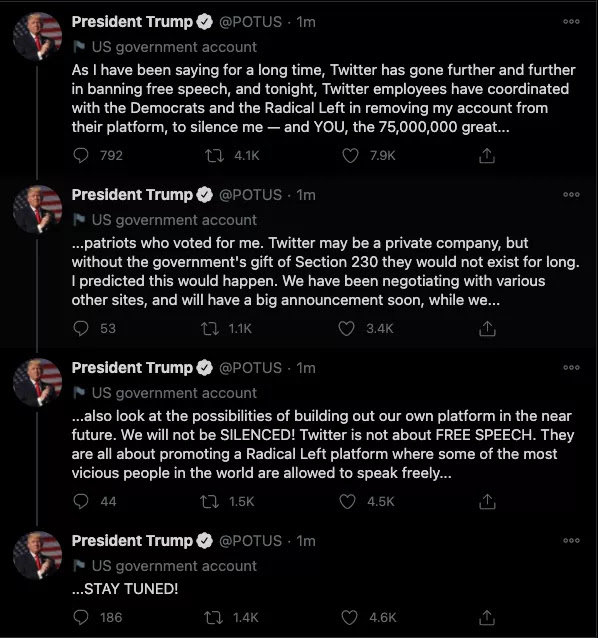 Twitter quickly deleted those tweets as a violation
Trump was undeterred and moved to the TeamTrump twitter handle. 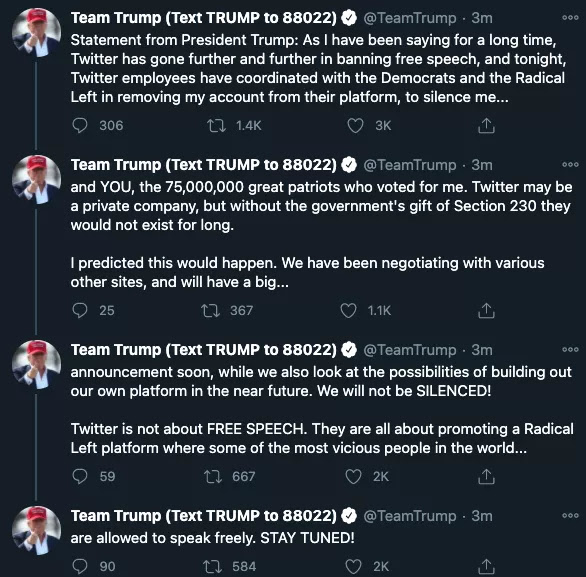 It too quickly joined the ban.

Trump then got Gary Coby, his Digital Director, to hand over his account and to rename it to Donald J. Trump, though the @GaryCoby still remained.  Through that account, Trump made it very clear who was tweeting, trying to reach out to Dan Scavino, the White House Deputy Chief of Staff for Communications and Director of Social Media.

Coby was then banned for a violation of their Enablement Policy.  Essentially a clause that prevents others from helping someone around a ban.

Trump's latest was to create a new handle @ThisIsPOTUS45, on which he tweeted "BIG CENSORSHIP FROM TWITTER! IT'S NOT OVER YET!" and including screen grabs of his previous attempts.

That didn't work either.

It would be comical if it wasn't so sad.  It reeks of an addict jonesing for his fix, desperate to send out another 140 character bon mot.  A cult leader who needs to be in constant touch with his followers to ensure that he maintains his grip on their reality.
And this is our president.  At least for a few days more.
This brings us to the cries of censorship and a violation of Free Speech and a necessary reminder as to why there is no actionable violation in all of this.
First, yes, this is censorship, but that really doesn't matter.  Censorship isn't actionable unless it affects a protected class based on that class identification or is perpetuated by a governmental actor.  Neither are present in this case.  Political affiliation is only a protected class in only a few states.  It's not protected on a federal level.  So you can be dropped from a platform for being a conservative and it still wouldn't be actionable.  It would be highly problematic, it would be financial suicide for companies, but it wouldn't be legally actionable.
It's also not what happened here.  Trump wasn't dropped because he is a "conservative."  (I can't even write in good conscience that he is a conservative without the air quotes.  Trump is Trump and a party unto itself.)  He wasn't dropped for spouting conservative talking points.  He was dropped because he's proven himself to at least negligently and at most deliberately incite a riot because he lost.  And he's still refused to acknowledge his involvement in the event, to shame those involved, and to fully admit defeat.  His statements since the insurrection attempt continue to perpetuate an image of him continuing to fight for a victory "stolen" from him and to encourage his followers to keep up the faith.
He was dropped because he continues to peddle in lies and at some point, if we want to put an end to misinformation, to disinformation, and to "fake news," we have to recognize that those that peddle it cannot be given platforms to continue to speak it.  Facebook, Twitter, Apple, and Google are private companies that have no obligation to provide the president a platform to voice his every thought.  He already has a press department, can call a press conference at the drop of a hat, and could be aired on every network if he needed.  They've even activated that forced message to all cellular phones technology.  He hasn't been silenced; he's just been inconvenienced from using his favorite rant delivery mechanism.
Which brings us to Free Speech.  Again, Free Speech isn't implicated because these are all private actors.  Private companies and individuals can censor all they like, within very few restrictions.  They can refuse service to anyone, so long as it is not a person in a protected class.  Facebook could decide to only let on people with red hair, green eyes, and who love the band Bowling for Soup.  Twitter could block all vegetarians if they so decided.  They could, it wouldn't be smart and the market would bear that out, but they absolutely could legally do so.
What we are seeing is a free market action deciding what is permissible in its space.  You know, the kind of thing conservatives used to champion.  It's the same argument conservatives were making when it was a Christian baker and a cake for a gay wedding.  It's just getting a different response when the shoe is on the other foot.
I have to admit enjoying a bit of schadenfreude last night.  Watching a president who has repeatedly and continually used Twitter as a weapon to appeal to the lowest demons of our nature be locked out from his favorite past time was a bit of beautiful serendipity in the midst of all this chaos.  This same person who unleashed a 44 tweet monstrosity in October last year following his hospitalization for COVID, revealing how deep his addiction goes.
It's another reminder of why what we do, what the Congress does over the next eleven days is so vitally important.  It matters, the precedent it sets matters, and his actions have to have consequences.
This one, at least, was somewhat funny to watch.
Posted by Mitch at 4:11 PM