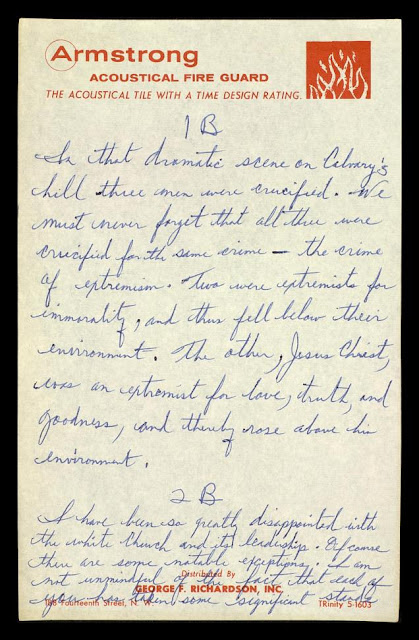 In thinking of the events of the last few weeks, of the insurrection, of the lukewarm condemnation from the right, of their half-hearted calls for unity, and Martin Luther King, Jr. Day yesterday, it led me to King's Letter from Birmingham City Jail, written April 16, 1963.
On April 12, an ally had smuggled him in a newspaper dated April 12, that contained an open letter from eight white Alabama clergy.  Called "A Call For Unity," this letter referred to King as an "outsider" who was directing the events, and urged activists to take up their issues in court not in the streets.

King rightly saw through these calls for unity for what they were - attempts to control the environment.  To maintain the status quo and avoid the hard fights.   In response, he penned his letter, his famous Letter from Birmingham City Jail, explaining exactly why such actions must continue to occur.  What struck me most, I have highlighted in bold.

"My friends, I must say to you that we have not made a single gain in civil rights without legal and nonviolent pressure. History is the long and tragic story of the fact that privileged groups seldom give up their privileges voluntarily. Individuals may see the moral light and give up their unjust posture; but as Reinhold Niebuhr has reminded us, groups are more immoral than individuals."

What we have seen over the past couple of weeks are the privileged trying desperately to cling to their privilege.  The privileged that have convinced themselves that they are the oppressed and have been assured of that "fact" by their leadership.