The Meaning of Words

Humpty Dumpty smiled contemptuously.  "Of course you don't - till I tell you.  I meant 'there's a nice knock-down argument for you!'"

"When I use a word," Humpty Dumpty said in rather a scornful tone, "it means just what I choose it to mean - neither more nor less."

"The question is," said Alice, "Whether you can make words mean different things - that's all."

"The question is," said Humpty Dumpty, "which is to be master - that's all."

My Constitutional Law professor used to quote this passage of Through The Looking Glass all the time.  When you control the meaning of words, you can do anything.  You can make up down, black white, and right wrong, just by changing the words.  This is the purview of Constitutional interpretation; to determine and define what the words in our laws and Constitution actually mean.

This is also the sad language of politics today.  Change the phrasing of the words and you can make any action or cause sound laudable or deplorable.  And I want to write today about something I'm seeing more frequently and something that is greatly angering me.

There's a terrible image going around on social media that sums up this sentiment greatly.  It represents a gross over-simplification of the state of political debate, at best, and outright falsities at it's worst.  It's a tool of the ever growing divide in this country, for as we know, one party just has to represent everything that is good with this country and the other just has to represent all the evils of this world. 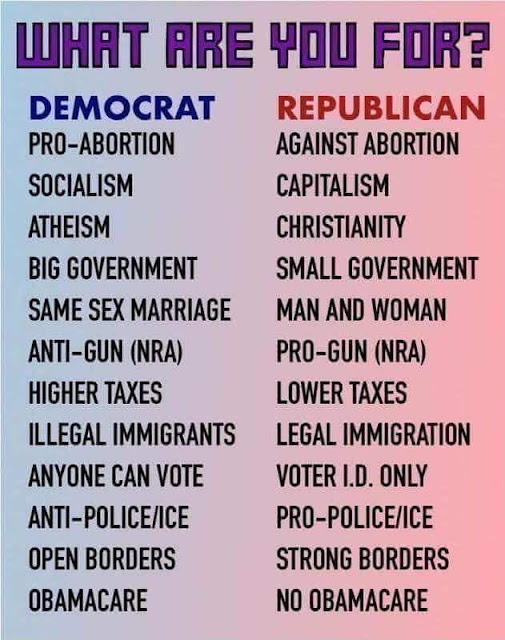 In terms of truthfulness, this image rates right up there with the posts that point out the pure coincidence that both American and Republican end in "I CAN" while Democrats ends in "RATS".  The actual party name is the Democratic party (just as the GOP name is the Republican party), though I suppose "ATIC" does not work as well to denigrate the opposition.

To prove a point, let me show you another image, one that is just as true as the one above. 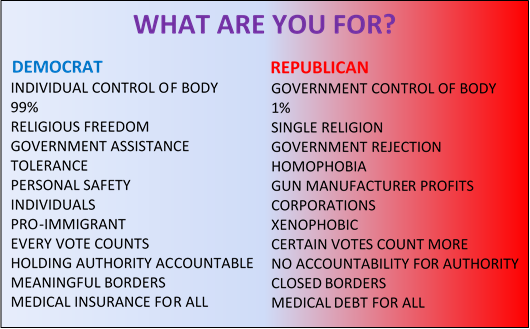 It's all in how you define the words.  Or in what words you choose to describe the particular topic.  Opposition to abortion can be "pro-life" or "anti-abortion."  A push for gun control can be "sensible gun control" or "they'll take away all your guns."  Both sides do it and it's getting worse.  If you actually believe that Democrats are all anti-police/ICE, I have a bridge in Arizona that I would like to sell you. Likewise if you believe that Republicans are all homophobic or xenophobic.

These images and the sentiment behind them are not helping our country in any way shape or form.  These posts and the ones claiming that our country will be socialist if the Democrats win or fascist if the Republicans win simply exist to further the divide in this country, ensuring that future elections and future debates will be more rancorous, more vile, and more fractured.

The only way we move past this is to recognize the manipulation in the images above and reject them.  To engage in a deeper discourse.  A deeper investigation.  And then to vote.

Read up on the candidates and vote for those that best represent you regardless of what little letter follows their name on the ballot.

There is a world of resources on the web to find out information on the candidates and issues on your ballot, including the two below.

There are literally hundreds of resources out there and a breadth of information available at your finger tips.  I realize I'm likely preaching to the choir, but a reminder never hurts.

Not because it's the most important election of our lifetime.  Not because of some fear-based image that tries to make you believe the other side is going to destroy our country (they won't).