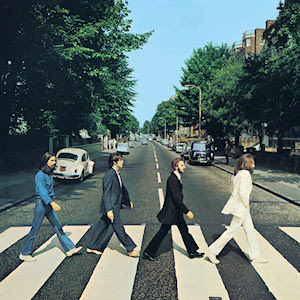 One of the most iconic album covers of all time turns 50 years old.  This photograph was taken August 8, 1969.  A design from an idea that McCartney sketched, it’s such a simple shot outside the EMI Studios. The cover features neither the artist name nor the album title on the front cover, the only original UK Beatles album to do so. As John Kosh, Apple Records creative designer, put it “we didn’t need to write the band’s name on the cover … They were the most famous band in the world.”

The group crossing that zebra stripe crossing has become one of the most imitated images around.  I know Brooke tried her hand at it on our trip to London in 2000.  There’s even a webcam that has monitored it since 2011.

It has sparked fringe theories like the “Paul is dead” theory.  That since, McCartney is the only one barefoot and out of step, he’s deceased.  The line is then a funeral procession, led by Lennon in white as the religious figure.  Followed by Starr in black as the undertaker, with Harrison in denim as the gravedigger.

How many other album covers can say that?

And though the recoding process was contentious, and though it represented an end for the Beatles (though Let It Be would be technically the last worked on and released), man what an album.

Talk about going out on a high note.  Those are songs where most groups would hope to have just one on an album.

We’re never going to have another group like the Beatles.  There’s so much content, it’s so fractured, that I don’t believe anything will ever hit like that.

And without a group like that, an album cover or cd cover, or associated image with a track is never going to pop like this one.

In remembrance, let’s heed the words of the final collective Beatles song -

Be good to each other.  And if you have Abbey Road photos, share them here.