“We can’t get too deep into the politics. And the characters can take sides, choose sides, turn evil, turn back to good, but they still have to entertain. That’s first and foremost, no matter what real-world events we are going to reflect, they are going to be fictionalized and they’re going to have the classic spin that Stan always brought to them. They will be serious, but they may make you smile.”

"If you are neutral in situations of injustice, you have chosen the side of the oppressor.  If an elephant has its foot on the tail of a mouse and you say that you are neutral, the mouse will not appreciate your neutrality."

There's a growing push, a rallying cry for entertainment to be apolitical*.  To be neutral.  To avoid the controversial or anything that might divide an audience and to just be entertainment.

In other words, to be toothless. 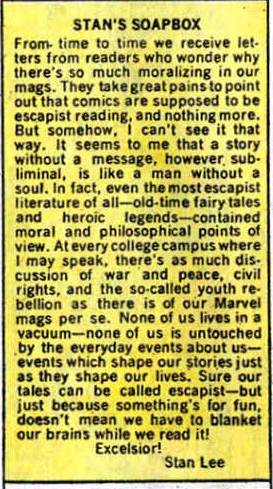 There are definitely times when stories, when entertainment can tell universally applicable stories that carry no overt or implied political meanings.  But to demand that every story be so is to misunderstand the purpose of entertainment in the first place.

Marvel Comics decided last year to do a bit of course correcting and move to an apolitical stance.  The quote from Editor in Chief Cebulski followed a particular notorious storyline in which Captain America was revealed to have been manipulated into being a Fascist dictator.  It involved mind control and full timey-wimey shenanigans.  It's comics.

The storyline definitely got a reaction and divided the comics community.  To be fair, many of the people objecting to the storyline were objecting without knowing the full story - they were objecting and protesting following a first act turn that was supposed to shock and unsettle.

The announcement also came in light of the Comicsgate movement; a campaign against perceived "forced diversity" and progressivism in comics hiring and content, with Marvel at the center of the crosshairs.  At the time, many of Marvel's legacy heroes (read white, male characters created in the 1940s and 1960s), had been replaced by heroes of more diverse backgrounds.  It's a common storyline in comics, where the hero is replaced by a substitute, only to come back later.  It just happened to be happening in several books at once.

In order to take the heat off, Marvel made an aggressive course correction, even going so far as to say "what we've heard is that people didn't want more diversity."  Books shifted back to the legacy heroes.  Storylines for the most part stopped being overtly political, with notable exceptions (you don't hire Ta-Nahesi Coates without expecting him to be political).

"All art is propaganda."

This apolitical stance has brought Marvel into the recent news.  Two high-profile creators have reported that Marvel asked them to revise their text pieces for books related to Marvel's 80th anniversary celebration.

First, Pulitzer Prize winning Art Spiegelman reported that Marvel asked him to revise his introduction for the Folio Society collection of Golden Age Marvel Comics to remove a pointed but passing reference to President Trump.  Spiegelman declined and pulled the introduction.

Now it is alleged that Marvel requested veteran creator and award winning Mark Waid to revise a text piece designed to accompany Captain America art in their Marvel Comics #1000 celebration issue.  A text piece which discussed the dichotomy of the flaws and virtues of America.

This at a time when it is more important to be political than ever.

At a time when toddlers are still going unrepresented in courts of law and are left to fend for themselves.

At a time when the administration is moving for the indefinite detention of migrant families, seeking to dismantle the Flores Agreement.

At a time when our President is confirming his plans to end birthright citizenship for children of non-citizen parents.

At a time when our President ponders nuking a hurricane.

At a time when we may finally see the deep connections our President and his family have to Russian oligarchs through co-signed loans, as a result of his tax returns finally being revealed.

It's past time we were all political.

If you cannot find something in that list above that doesn't make your blood boil, I would suggest checking for a pulse.

And for comics, it's time for our heroes to inspire us.  To show us the better way, the brighter future.  For them to show us truth, justice, and the American way.  An American way that applies to us all equally.

For the sake of art inspiring us, I'm including Waid's unaltered text piece below.

It’s hard sometimes.  The system isn’t just.  We’ve treated some of our own abominably.

Worse, we’ve perpetuated the myth that any American can become anything, can achieve anything, through sheer force of will.  And that’s not always true.  This isn’t the land of opportunity for everyone.  The American ideals aren’t always shared fairly.

Yet without them, we have nothing.

With nothing, cynicism becomes reality.  With nothing, for the privileged and the disenfranchised both, our way of life ceases to exist.  We must always remember that America, as imperfect as it is, has something.  It has ideals that give it structure.

When the structure works, we get schools.  We get roads and hospitals.  We get a social safety net.  More importantly, when we have structure, we have a foundation upon which to rebuild the American Dream — that equal opportunity can be available to absolutely everyone.

America’s systems are flawed, but they’re our only mechanism with which to remedy inequality on a meaningful scale.  Yes, it’s hard and bloody work.  But history has shown us that we can, bit by bit, right that system when enough of us get angry.  When enough of us take to the streets and force those in power to listen.  When enough of us call for revolution and say, “Injustice will not stand.”

That’s what you can love about America."