Are You Not Entertained?

Most of you know, I don't really follow sports, but this news item spoke to me.  Andrew Luck, quarterback for the Indianapolis Colts, announced Saturday night, August 24, that he was retiring from professional football at the age of 29.  “This isn’t how I envisioned this or planned this, but I’m going to retire.  This is the hardest decision of my life, but it’s the right decision for me."

Luck was one of the most highly decorated college quarterbacks in history and was the number one overall draft pick in 2012.  His career in the NFL, though, was plagued with injury after injury.  He missed the entire 2017 seasons for shoulder surgery.  He suffered a lacerated kidney, a partially torn abdomen, and torn rib cartilage.  This year, he was out most of training camp and the preseason because of a lower leg problem.  “I’ve been stuck in this process. I haven’t been able to live the life I want to live.  It’s taken the joy out of this game.  The only way forward for me is to remove myself from football.”

Luck walked away to better his health, to be with his wife, who is expecting their first child, to refocus his future, and to find his passion again.  All mature decisions that should be applauded.

After the announcement was made in the stadium on Saturday, fans booed Luck as he walked off the field.  As if he owed them anything.  As if they were entitled to his performance.

At what point does our love of a game, our desire to win supersede the desires of the players?

Does fantasy football further this detachment from the players as people - instead viewing them as fungible pieces related to their function?

Do the players just exist to show up and play, regardless of the circumstances?  There are a lot of troubling implications if we want to go down this path.

At what point does our entitlement override our concern for the players health and safety?

Do we really think they owe us their physical and mental health?

Are these really just our modern gladiatorial games?

Will we not be satisfied until blood is finally shed?

Are you not entertained?

I’m focusing on Luck and football for now because we know there are very problematic issues in the game of football.   We have report after report regarding the damage that the players are suffering.  Chronic traumatic encephalopathy (CTE) is much more of an issue than we would like to believe.  It has been found in 99% of deceased NFL players’ brains that were donated for research.  And it’s heartbreaking to read story after story like that of Debra Fellows, wife of Ron Fellows, cornerback for the Dallas Cowboys and Los Angeles Raiders.  Fellows is suffering from Alzheimer’s brought on by CTE.

But this is entitlement is not limited to the fans of the NFL or even sports in general.  It spills over into all our forms of entertainment.  In response to Luck’s announcement, Yvette Nicole Brown, lead on television’s Community, discussed the “fans” she had to deal with who viewed it as a personal slight that she stepped away from the show to take care of her father.

I had to deal w/some mean “fans” after I had to leave @CommunityTV to care for my dad. To this day, I don’t understand how putting my family first was seen as a personal slight to them. #AndrewLuck has played thru a LOT of pain. He doesn’t want to, anymore. He shouldn’t have to. https://t.co/S646J3x1qj
— yvette nicole brown (@YNB) August 25, 2019

Or how about the response David Chappelle got when he walked away from his show at the height of its popularity because he couldn't handle the stress anymore and why he headed back to standup.  "It's incredible. Because I was surrounded by so much negativity at some point that it took me going back and doing stand-up to realize, you know, people really like me. There's a lot of people who don't want anything from me but to laugh and have a good time. You see them at the show and they like -- they dress up to come see your show and stuff. And they pack these auditoriums and it's a lot of fun, man. It's like, this is how I started, and it's still fun for me."

I've shared before how we see this entitlement in how we shout down entertainers or athletes when they dare voice a contrary political opinion, as seen in the image below. 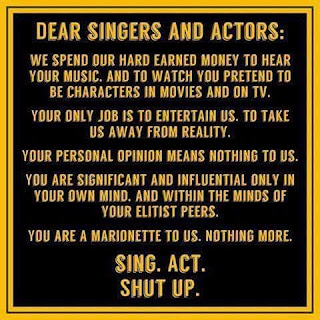 You are a marionette to us.  Nothing more.

Here's the thing - this is just as true on a micro level as well.  If nothing else today, I think this is an important truth to share:

You should not have to sacrifice your physical health, your mental health, or the health of your family for your job.

If you are trapped in a job that is damaging your physical health, that is gaslighting you or eroding your mental well-being, or is putting a strain on your marriage or parental relationships, it's time to find a new job.

You are more than a cog in the machine.

I understand the above is complicated.  There are situations in which we do find ourselves trapped . and sometimes the job is needed just to make sure the bills are paid.  We have to do better as a society to make sure for holding businesses to the labor reforms that we have already created and for creating new ones that address the new issues in labor relations.  We have to create a better social structure so that if you work a full time job you can actually have a living wage.  We've got to be better about taking care of each other and supporting each other in every situation we find ourselves in (that's tomorrow's blog) to make our environments better places.  And sometimes we like the job that we have and don't mind the sacrifice because of the fulfillment.  That's ok, that's sacrifice for a purpose.

But if your health is deteriorating, you are miserable, your relationships are at their limits, it's time to find something else.  There is something better out there.

And it's better to end on your terms, like Luck, than to push on and find yourself burned out and used up in a job that would have replaced you in a second.

Take care of yourselves.
Posted by Mitch at 11:59 AM