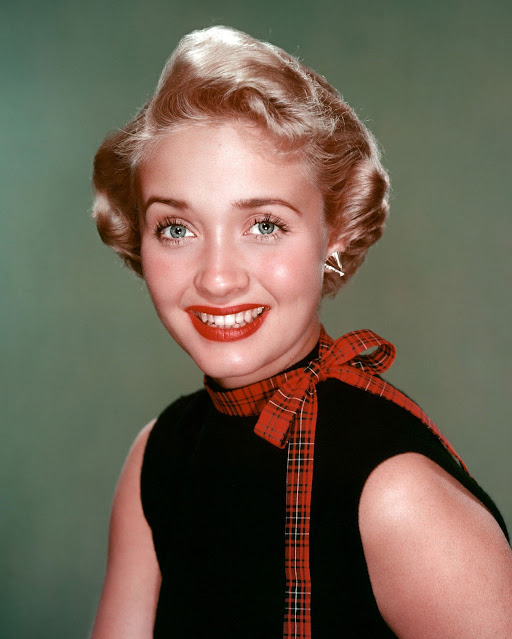 There are certain movies that are replayed a lot in our house hold.  The Nightmare Before Christmas, Jurassic Park, Jaws.  All for a variety of reasons.  Nightmare for Jude. Jurassic Park for 90's nostaglia.  Jaws once a year for Fourth of July.

There are certain types of movies that get played a lot too.  We watch a lot of musicals.  I'm a sucker for classic Dream Factory musicals when they are on TCM.  Even if the plot is bad, I love discovering the old songs.

It should come as no surprise, then, that Seven Brides for Seven Brothers is played a lot.  Not as often as Jamie watched it as a teenager, but a lot.  More than once a year.

Powell's Milly is the glue that holds it all together.  Her rich and clear operatic soprano pared so well with Keel's bass-baritone.  Her comic timing was impeccable.  The role remained her signature and best performance, truly marking her transition from child to adult characters.

Career highlights include the previously mentioned Seven Brides and Royal Wedding, in which she played Fred Astaire's wise cracking sister, giving her a chance to keep up with Astaire in a six-minute musical number of witty banter, song, and dance.

Jane Powell passed away yesterday of natural causes in her home at the age of 92.   She was one of our last surviving links to that Golden Age of Hollywood.