The Cube Theory of Food 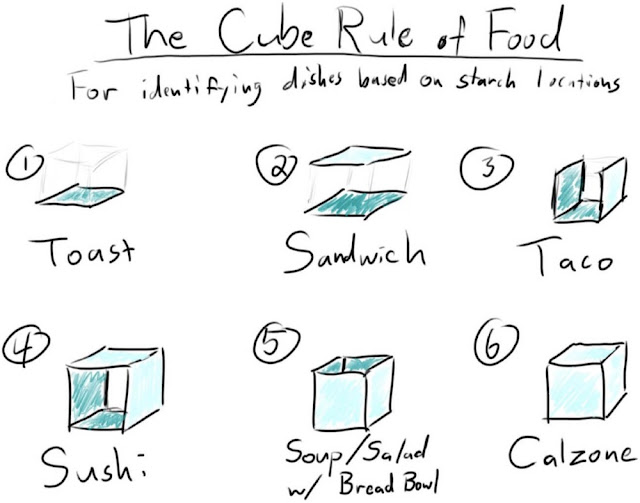 This was the lighthearted question raised as a poll yesterday for the praise team and audio/visual team at church.  It only received two responses, one yes, and one depending on if it had cheese.

My response was no, a hot dog is a taco.  For I subscribe to the cube rule of food.

Surprisingly, there has been a lot of history and development in this area.  It started with the initial question raised yesterday.  "Is a hot dog a sandwich?"  Apparently, New York state says yes, classifying hot dogs as sandwiches under tax bulletin TB-SB-835.

Then Twitter went a little crazy and decided to declare that Pop Tarts are a sweet form of ravioli.  Pop Tarts corporate denies this, and says that ravioli is just a savory pop tart.

Someone then decided to create a sandwich alignment chart, following the Dungeons and Dragons alignments.  Here based on structure and ingredients as opposed to the lawful/chaotic and good/evil dichotomies.

This is helpful, but still a bit wanting, not quite covering the breadth of food related arguments that could be raised.

Twitter to the rescue again, with the Cube Rule of Food, thanks to user @Phosphatide.  The cube theory of food is a grand unified theory of food categorization based on the number of pieces of bread (or starch) and their location in correlation to other.

No starch is a salad.

With one piece of starch, the other ingredients are necessarily on top.  This is toast.  Think avocado toast, toast with jelly.  But also under this structure, pizza is toast, nigiri sushi is toast.

Two pieces of starch, parallel to each other makes a sandwich.  This would include the traditional sandwich designed by the Earl himself, as well as quesadillas and stroopwafel.

Three pieces of starch gets us to the hot dog example.  The three pieces would be placed in a u-shape to hold the food.  This makes it a taco.

Meaning a hot dog is a taco.

Perhaps more controversial for Texas, four pieces of starch (a box with open ends) make sushi.  This means that pigs in a blanket and enchiladas are sushi.

To round out the list, five pieces of starch, creating a bowl shape with an open top, makes a quiche.  This is a correction to the chart above, which has a bread bowl.  This would be an example, but it should be labeled quiche.  This category can also include deep dish pizza and pies.

Finally, six pieces of starch, completely enclosing the ingredients, makes a calzone.  Corn dogs, burritos, chimichangas, dumplings - these are all calzones.  In Texas terms, your klobasniki and kolaches are calzones.

A handy guide to help settle any useless arguments that may be raised.  And a lot of fun silliness to counteract the overbearing muchness of the world right now.

A hot dog is a taco.

Email ThisBlogThis!Share to TwitterShare to FacebookShare to Pinterest
Labels: Cube Rule of Food, Fun, Is a Hot Dog a Sandwich?, Weird Questions