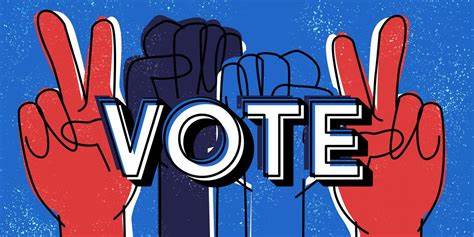 Today's the day.  If you have not yet voted, drop what you are doing and get out there and vote.
No excuses.

Work isn't an excuse.  In many states, there is job protection if you need to take time off and get to the polls.  Check here to see the protections in your state.
Vote.
If you don't have child care, bring them to the polls.  I saw many people having to do so when I waited in line.  Children are allowed, though some states have a limit on the number of children permitted to accompany a voter.  Check with your local commissioner if you are planning to bring more than one or two.
Vote.
If you don't know the times for the voting polling places, check out the information graphic below. 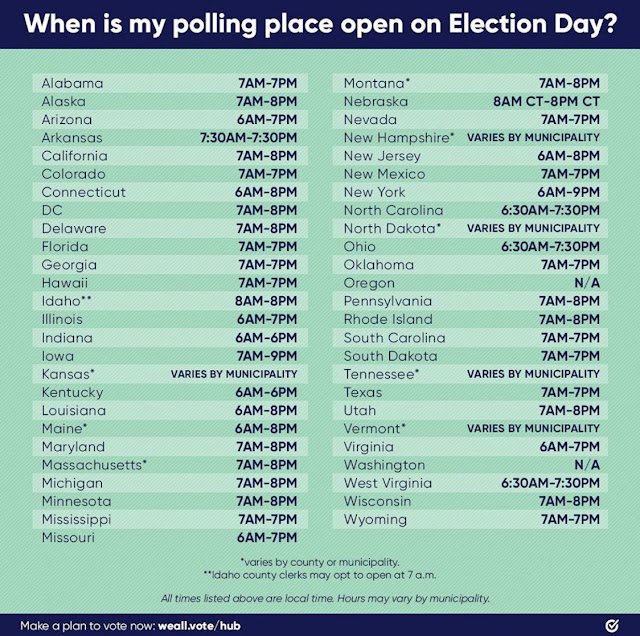 If you do not know where to go vote, check vote.org for your local polling place.
Vote.
If you are unsure who best represents your beliefs and interests, check votesmart.org or ontheissues.org for a breakdown.
Vote.
If you need a ride to a voting location, Uber and Lyft are giving free rides to the polls.
Vote.
Be sure to bring a photo id with you to vote. The seven forms of primary identification are listed on votetexas.gov and include a passport, a driver’s license, a certificate of citizenship, a handgun license, a military ID card, personal identification card, and a voter’s ID certification.  Check what is required in your state.
Vote.
If you do not have one of these forms of identification, you can still vote with one of the secondary forms of identification available like a current utility bill and by filling out a Reasonable Impediment Declaration regarding why you cannot have one of the primary identifications. Even if you cannot make a reasonable declaration, you can still vote on a provisional ballot.
Vote.
If you run into any problems at the polls, at least ask to vote on a provisional ballot.  Verbatim, ask the following "Give me a provisional ballot with a receipt as required by law."  This will at least allow you to mark your vote and will give you six days to resolve the identification issue.
Vote.
If you cannot walk into the polling location, have someone go in and ask for a curbside ballot for you.  It should be available to anyone who has difficulty walking and standing in line for long periods of time.  If you need any other assistance in voting, make sure you know your rights in that regard.
Vote.
This is by far the most important national election of our lifetimes.  It is imperative that we exercise the most fundamental right that we have in this country and raise our voices.  We are already seeing record voter turnout in this election and that is a win regardless of who is ultimately named the victor.
Be prepared, we may not have a clear winner announced this evening.  That is not a bug in the system, it is not a failure - it's a feature.  We must be vigilant that every vote counts.
I know it's tiring; I know we want this to all be over.  My prayer is that the results are so overwhelming that there is a clear decisive victory.  That the map is completely blue and reflects a sound refutation and repudiation of all that Donald Trump stands for.  That it is too overwhelming to ignore.  But I recognize that decisive of an election is likely not in the cards tonight.  We are potentially in for a long haul.  We're up to this fight and we will make sure every vote counts.
This year we are celebrating 100 years of women's suffrage.  I cannot think of a better way to celebrate the ultimate granting of a right that women should have always had than for America to finally show up with an overwhelming majority of active voter participation.
Your voice matters.
Your vote matters.
Get out there, and get to it.
Vote like your life depends on it, because it likely does.
VOTE!
Posted by Mitch at 2:40 PM