You Can't Be A Christian And Vote Republican 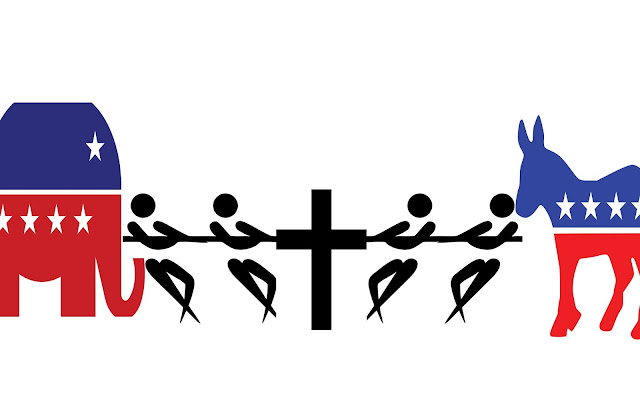 Not what I intended to write about today, but something that needed to be said with Tuesday looming.
I mean, it's controversial, right.

Provocative even.  Possibly even downright offensive.

It's a statement I really shouldn't make.  It's the kind of statement that can't be proven, that has no Biblical basis, and inflicts more damage than any good it can do.

And yet, it's likely been made in many churches this morning.  Churches of a certain persuasion, with specific demographics.  Probably among many Christians this week and in the weeks and months leading up to the election.  I know, I've seen it.

It's just been phrased a little differently.

The statement I made in the title is no different than any of those statements above.  Each presumes that one party has a monopoly on God, which cannot be true.

Jamie and I have been going through a Tony Evans series in the past few weeks entitled How Christians Should Vote, and it has been really eye opening.  The most profound realization that I have had in this whole process is that there will be Christians who vote Republican in this election and there will be Christians who vote Democratic in this election, and BOTH will be voting godly, so long as they are voting in prayer and in support of the policies that God has put at the forefront of their personality.

This can happen because there is no one perfect candidate or party - i.e. there is no Biblical party.  Both Democrats and Republicans are a mixture of good and bad.  Divine and profane.  Just like humanity.

And the truth is, we need BOTH parties.  Because each focuses on different aspects of the Gospel message.

Republicans stand for policies that are praiseworthy - protection of the unborn, preservation of Christian values and protection of Christian religious freedom, etc.  Democrats also stand for policies that are praiseworthy - a push for social justice, for racial equality, for gender equality, for improved socio-economic conditions.  Both parties also have deplorable practices.  In our liberty, Christians have different causes that are placed on our consciences to champion.  This can push us to one party or the other, depending on what has been laid on our hearts.

We also must recognize that there is no ranking of sins.  All sins are equally grievous to God.  All sins equally separate us from God.  All sin leads to death.  Republicans often are single issue voters with abortion being the one issue they elevate above all others, as if it is the most important national sin to address.  Democrats equally can focus on injustice as the number one national sin.  Focus on either to the exclusion of all others leads to none of them being adequately addressed - we become too divided, too tribal, too fractured to actually get anything accomplished.

Where Christians vote ungodly is when they adhere to party alliances above all else.  Where they believe that one party has a monopoly on righteous policy.  Where they demonize the other party as being impossibly disconnected from God.  Where they doubt the faith and salvation of people who vote for the other party.  (After all, why should we take Trump's word that he is a Christian, but doubt Kamala Harris.)

Evan's point is that we've gotten led astray by continuing to view this as a two-party situation.  Us versus them.  Democrats versus Republicans.  As if one party will be right and the other party will be wrong.  As if being right is what matters above all else.

We forget, God does not ride the back of elephants or donkeys, as Dr. Evans would put it.

Evans compares it to viewing only two teams on a football team and forgetting that there is a third group out there - the referees.  Christians are supposed to be referees.  Calling penalties and fouls as we see them, upholding and confirming legitimate plays.  We cannot side with either team on the field, but most remain impartial, aligning with a higher governing authority.

Too many Christians have decided to forsake being referees and have put on the jersey of the Republican party.  You can see this in the number of pastor's who give outright endorsements.  Who have nationalistic services.  Who make statements like the one above, like Christians can only vote Republican because theirs is the only Biblical platform.

When we do this, we lose our authority to call out penalties on either side.  We've shown partiality and corrupted the whole game.

If you need an example, I offer Al Mohler, President of the Southern Baptist Theological Seminary, in his endorsement of Trump.  His individual choice to vote for Trump is not problematic.  Nor is any individual Christian's.  Where I take serious issue is how he spends the entirety of his article outlining how voting for Trump, voting Republican, is the only correct Biblical worldview.

To get there, he has to conveniently side-step his hypocrisy from his comments in 2016, where he said he would not vote for Trump and said if he did, he would have to apologize to President Bill Clinton for his comments during the Monica Lewinsky affair.  He said then that character in a president matters, but now he is having to contextualize that statement.  So, he's voting for Trump and of course, not apologizing to Bill Clinton.

He also has to side-step the large constituencies of Christians that he knows historically disagree with him, particularly Black churches and Christians.  For context, 81% of white evangelicals vote Republican.  80% of Black Christians vote Democrat.  Consistently.  So if there is just one correct way to vote Biblically, there are a lot of people in trouble.  Mohler comes close to recognizing this paradox in two separate passages.

"I agree that there are many other issues that press on the Christian conscience—questions of economic policy and foreign affairs and energy and the stewardship of the earth. The searing pain of racial injustice and the unraveling of our social fabric demand Christian response and urgency. Christians must be concerned about questions of immigration policy and refugees—and these issues defy the simplifications of the sound-bite and tweet culture."
As a workaround, he has to engage in a ranking of sins to focus on abortion as the primary issue.  He then speaks particularly to the divide between white and black Christians.
"There will be evangelicals who cannot in good conscience vote for Donald Trump. I understand their predicament. But not voting for Donald Trump, though a political decision in itself, is not the same as voting for Joe Biden. This is beyond my moral imagination.

I also recognize that I know brothers and sisters in Christ who see this differently. The vast majority of Black voters in America vote regularly and predictably for the Democratic ticket, and have since 1960. Like the pattern of white evangelical voting, this is not a surprise. There are long historical reasons why both are so. With my black brothers and sisters, I make my best case for how I see the issues. (emphasis mine) They have every right to do the same. We each have a vote. Both of us will answer to God for that vote. We earnestly seek to persuade the other. We will likely vote differently in the end. We remain brothers and sisters in Christ."
Here a recognition of some liberty in the process.  There are serious issues that have led the Black Christian community to consistently vote Democratic. Issues that the Democratic party focuses on - social justice, equality, housing, urban development, voter protection, healthcare.  Issues that are sadly, often ignored at best, or opposed at worst by the Republican party.  These Black Christians are voting their godly convictions just as white Evangelicals do.  Perhaps, instead of dismissing them, we should inquire as to why their convictions lead them to vote for the opposite party consistently.  This is what we should be encouraging, this is what we should be promoting in this election season.
Mohler sadly undercuts this with the remainder of his article. You cannot claim one Biblical worldview for voting without the corollary that everything else is wrong, despite your allowance for disagreement with this one community.  In short, he, by the content of his writing, has dismissed the entire Black Christian community vote as being based on an unbiblical worldview.  This is especially evident when he follows this passage with a clear claim that the Southern Baptist position will align with his own.  "The convictions of Southern Baptists are clear, and I am confident that the vast majority of Southern Baptists will vote according to those convictions. That pattern has been in place for many decades."  I.e. Republican, as he has outlined it.
Had Mohler focused his article primarily on the statement in bold (I make my best case for how I see the issues), I would have no issue.  But I take serious issue when anyone tries to proclaim there is one perfect Biblical party.  No matter the party they identify.
Christians should be the consummate independent voter.  Voting their conscience and voting for the person, party, or platform that most closely align with a Biblical worldview as their prayer and conscience directs them.  That necessarily would mean voting for Republicans, for Democrats, for Libertarians, for Green Party members, for independents depending on the year and the election.  If your voting has been 100% for one party completely down ballot for the past several elections, you may need to reevaluate your voting process.
Vote.
Vote your conscience.
Vote prayerfully.
Give your allegiance to God, not to a political party.
And remember, no matter who wins this election, God is still in control.  He is still on His throne, He is still in His house.  There will be fellow Christians celebrating and mourning on Wednesday morning.  Be kind and be unifying.
Posted by Mitch at 3:08 PM