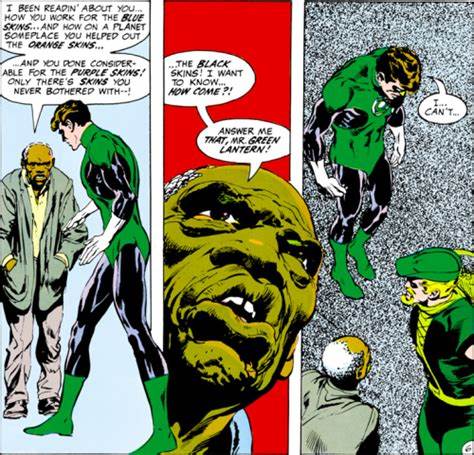 Celebrated comic book writer Dennis O'Neil passed away yesterday at the age of 81.  He died in his home of natural causes.
I can almost guarantee, whatever part of Batman you like, you have O'Neil to thank.  O'Neil was credited of bringing Batman back to his crime roots after the campy 1960s television show.  He revamped Two Face and the Joker, and created the eco-terrorist R'as Al Ghul.  He remained a Batman editor and influences into the 2000s.
O'Neil was also noted for bringing social issues into this comic book writing.  He penned the famous Green Lantern/Green Arrow comic above that asked the question why superheroes did not address the social issues of the day.  He also wrote the later issue dealing with drug abuse and addiction in which Green Arrow's sidekick speedy dealt with heroin withdrawals.
People often forget that comics have been about social justice since their founding.  Superman was fighting slumlords in his inception.  Captain America famously punched Hitler on his cover.  Marvel Comics in the 1960s focused on civil rights.  In the 1970s, Ms. Marvel and She-Hulk dealt with Women's Lib.  Social justice is the lifeblood of comic books and superheroes.
O'Neil was one of the greatest writers to give that a voice.
He will be missed.
Posted by Mitch at 7:23 PM

Email ThisBlogThis!Share to TwitterShare to FacebookShare to Pinterest
Labels: RIP