On the Basis of Sex

The Supreme Court handed down a landmark case in civil rights today and a great present for Pride Month.  In Bostock v. Clayton County, Georgia, 590 U.S. ____ (2020), the Court in a 6-3 opinion confirmed that Title VII protections extend to sexual orientation and gender identity.  Justice Neil Gorsuch wrote the opinion. 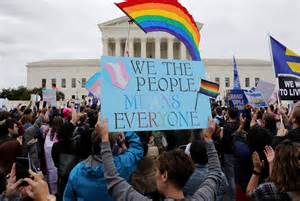 "Today, we must decide whether an employer can fire someone simply for being homosexual or transgender.  The answer is clear.  An employer who fires an individual for being homosexual or transgender fires that person for traits or actions it would not have questioned in members of a different sex.  Sex plays a necessary and undisguisable role in the decision, exactly what Title VII forbids.

Those who adopted the Civil Rights Act might not have anticipated their work would lead to this particular result.  Likely, they weren’t thinking about many of the Act’s consequences that have become apparent over the years, including its prohibition against discrimination on the basis of motherhood or its ban on the sexual harassment of male employees.  But the limits of the drafters’ imagination supply no reason to ignore the law’s demands.  When the express terms of a statute give us one answer and extratextual considerations suggest another, it’s no contest.  Only the written word is the law, and all persons are entitle to its benefit."
Up to today, twenty-eight states had little to no workplace protection for the LGBT community.  Texas is one such state.  While some individual cities do have protections in place, as a state, Texas has no law on the books protecting employees from workplace discrimination based on sexual orientation or gender identity.  Meaning, yesterday you could have been fired in Texas if your employer learned you were homosexual, and there would be no recourse.  The employer would have been able to do so with no repercussion under the law.
That was the case for the three plaintiff's in the instant case.
Gerald Bostock worked for Clayton County, Georgia as a child welfare advocate. His tenure with the county was marked by recognition and award. Ten years into his work, he began to participate in a gay recreational softball league. Soon after that, influential members of the community allegedly made disparaging comments about his participation and his sexual orientation. Bostock was fired for conduct “unbecoming” a county employee.

Donal Zarda worked as a skydiving instructor for Altitude Express in New York. After several seasons with the company, Zarda mentioned he was gay and was fired days later.

Aimee Stephens worked at R.G. and G.R. Harris Funeral Homes in Garden City, Michigan. When she got the job, she presented as a male. Two years into her employment, she began treatment for despair and loneliness and was diagnosed with gender dysphoria. The recommended treatment was to begin living as a woman. In her sixth year with the funeral home, Stephens wrote a letter to her employer explaining she would be living as a woman after she returned from her upcoming vacation. The funeral home fired her before she left, telling her “this is not going to work out.”

Their stories are not alone.  They could be repeated by thousands others across the country.  And we know that the discrimination that all like them have faced is wrong and has always been wrong.  That their orientation or gender identity has nothing to do with their work, and should not impact it.  The Court recognized this truth.
The Court reached its decision looking at the "basis of sex" language, proving that you cannot discriminate based on gender identity or sexual orientation without also discriminating based on biological sex.
"An employer violates Title VII when it intentionally fires an individual based in part on sex. It doesn’t matter if other factors beside the plaintiff’s sex contributed to the decision. And it doesn’t matter if the employer treated women as a group the same when compared to men as a group. If the employer intentionally relies in part on an individual employee’s sex when deciding to discharge the employee - put differently, if changing the employee’s sex would have yielded a different choice by the employer - a statutory violation has occurred. Title VII’s message is ‘simple but momentous’: An individual employee’s sex is ‘not relevant to the selection, evaluation, or compensation of employees.’ Price Waterhouse v. Hopkins, 490 U.S. 228, 239 (1989) (plurality opinion).

The statute’s message for our cases is equally simple and momentous: An individual’s homosexuality or transgender status is not relevant to employment decisions. That’s because it is impossible to discriminate against a person for being homosexual or transgender without discriminating against that individual based on sex."
It's so plain, it makes you wonder why this has taken so long to be recognized?  Why twenty-eight states have resisted such protection?  Why it has taken so long for federal recognition?  What discrimination against the LGBT community in employment would benefit any business?
Is it just our fear and bias?  Are we that transparent in our prejudice?
Harder question - how much of this discrimination has been championed by the Church?  And on what basis can we justify such behavior?
I know I'm going to hear fears of how this will force churches to hire homosexual ministers or how it is just another way that the church is being "forced" to "accept homosexuality."
Gorsuch puts the nail in these fears in his opinion.
"But worries about how Title VII may intersect with religious liberties are nothing new; they even predate the statute’s passage. As a result of its deliberations in adopting the law, Congress included an express statutory exception for religious organizations. 2000e-1(a). This Court has also recognized that the First Amendment can bar the application of employment discrimination laws ‘to claims concerning the employment relationship between a religious institution and its ministers.’ Hosanna-Tabor Evangelical Lutheran Church and School v. EEOC, 565 U.S. 171, 188 (2012). And Congress has gone a step further yet in the Religious Freedom Restoration Act of 1993 (RFRA), 107 Stat. 1488, codified at 42 U.S.C. 2000bb et seq. That statute prohibits the federal government from substantially burdening a person’s exercise of religion unless it demonstrates that doing so both furthers a compelling governmental interest and represents the least restrictive means of furthering that kind of interest. 2000bb-1. Because RFRA operates as a kind of super statute, displacing the normal operation of other federal laws, it might supersede Title VII’s commands in appropriate cases. See 2000bb-3."
There is no other way to describe this - today's decision is a decisive victory for civil rights in this country.  It should be celebrated by us all.  It will likely have sweeping impacts far beyond employment into education, health care, housing, and financial credit.  All areas in which we can begin making sure that everyone, all people are treated equally under the law.
This is a great beginning, but there is still a long way to go.  The Trump administration on Friday released a new regulation limiting the definition of sex discrimination in health care to exclude the transgender, effectively yanking health insurance from them.  In a global pandemic.
This also has no impact on discrimination in public accommodations, where discrimination based on sex is not barred by federal law.  Thirty-one states have no protections against discrimination based on sexual orientation or gender identity in public accommodations.  This means hotels, motels, and other lodging can deny rooms to guests based on the sexual orientation of the couple, the gender identity of the guest upon arrival, etc. without repercussion.  Are we really at a point where there needs to be an LGBTQ equivalent of the Green Book?
Hopefully not.  Hopefully that domino will fall.  And the next and the next and the next.  Until we can finally live up to our standards, "that all men are created equal."
That all people are created equal.
And we should treat them accordingly.
Posted by Mitch at 4:20 PM

Email ThisBlogThis!Share to TwitterShare to FacebookShare to Pinterest
Labels: Victory