One Ranger, One Riot

As mentioned yesterday, today I would like to discuss the Texas Rangers.

No, not the baseball team.

The law enforcement agency.  The mythic Texas lawman depicted in "The Lone Ranger" and "Walker, Texas Ranger."  The ultimate, hyper-capable cowboy sheriff who rides in on a white horse and saves the day.  "One riot, one ranger" and all that.

Those Texas Rangers have become the subject of much discussion of late, thanks to the removal of the Texas Ranger statue at Love Field.  The statue was removed by the City of Dallas and moved to storage in light of the protests around the world regarding American police brutality.

As expected, many voices have since decried the action, believing it erases history or caves to the rioters.  In truth, there is a lot of justified reason for taking down this particular statue, particularly in light of the ongoing conversation about police brutality.

The history of the Texas Rangers is littered with use of excessive force, police brutality, and racial prejudice/outright racism.  The early rangers completely wiped out the Karankawa tribe, the coastal Native American tribe.  They operated as death squads along the Texas-Mexico border, executing hundreds to thousands of Mexican-Americans, particularly in 1915-1919 or "Hora de Sangre" or the hour of blood.  To the point where they were viewed as the equivalent of the Klu Klux Klan for Mexican-Americans.  "Los Diablos Tejanos."  Among that population, the Rangers mythic motto, "One riot, one ranger" would be flipped to indicate the power they could wield - "One ranger, one riot."  The Rangers kept blacklists of ethnic Mexicans, performing the "evaporation" in which they would make those on the list disappear as if they had just evaporated into thin air.

That's just the tip of the iceberg.  The Porvenir Massacre of 1918 in which they executed every hispanic male in the town.  Their role in capturing runaway slaves.  Their role in opposing and preventing the de-segregation of schools.

This can be very clearly seen with respect to the statue that has been removed.  The statue in Love Field was modeled after Ranger Sgt. E.J. "Jay" Banks.  And Banks has a particularly complicated history in the Texas Rangers.

Banks was the commanding Ranger sent by Former Governor Allan Shivers to prevent the initial attempts at integration in Texas.  He was sent to Mansfield ISD to prevent black students from entering the high school, despite a Federal court order and he was then sent to Texarkana Junior College to prevent black students from enrolling.  At both locations, Banks and his Rangers stood by and watched the white mobs.
Banks would describe the white mob at Mansfield as follows.  "They were just 'salt of the earth' citizens.  They were concerned because they were convinced that someone was trying to interfere with their way of life."

That doesn't really sound like someone we want to honor, does it.

Banks was captured on film in front of Mansfield, leaning against a tree, standing by while the white students have gathered and hung an effigy of a black person off the top of the school, right in front of the entrance.

So, here's the question.  Which picture upsets you more? 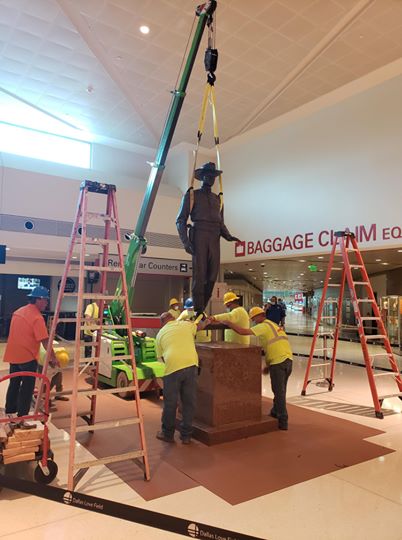 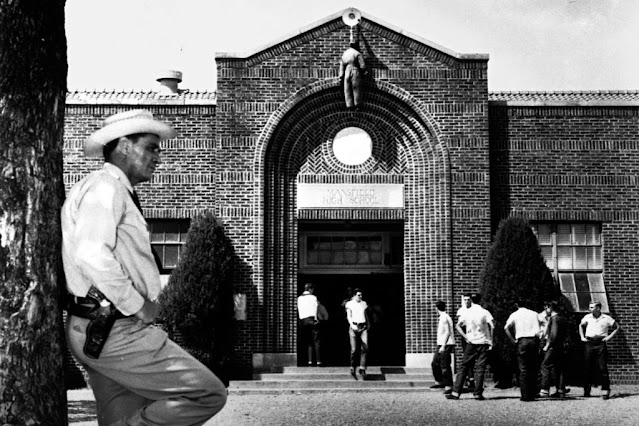 They both represent the same man.

The second one reflects actual history.  It's the facts.

The second one is what we must remember.  It's how we should accurately reflect on his legacy.

The first is just a piece of metal.

Acknowledgements to the right honorable Govteach and his blog on the topic, particularly leading me to the historic photo.
Posted by Mitch at 6:20 PM