If you are looking for a ray of hope in all the craziness that is going on in the world right now, may I suggest the following piece of once thought impossible news:


Black Lives Matter held a peaceful protest and march in Vidor, Texas, with virtually no altercations.

Vidor, of all places. 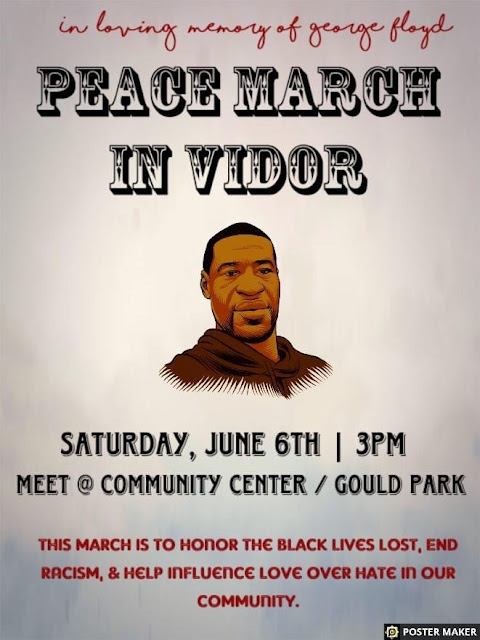 For those unfamiliar, Vidor has a rather infamous reputation in Southeast Texas.  It was dubbed the most hate filled city in Texas by Texas Monthly Magazine.  It was a notorious "sundown town" in which blacks were not allowed in the town after dark.  This status was proclaimed by a prominent sign warning them not to be found in the town after dark.  According to oral history, it stated it's premise in the most direct and offensive terms possible.

The reputation of the town alone made the sign overkill.  The Klan had a visible presence in town.   Up to the mid-1990s.  In 1992, when housing authorities announced a plan to move black families into Vidor, the Klan held a mass demonstration on the county courthouse in Orange, with several marches in surrounding cities including Vidor.  The white supremacist Nationalist Movement held its Victory in Vidor rally after all the last black family had moved out.   Even as recent as 2003, the Klan held a lecture and viewing of Klan memorabilia in the Vidor Community Center, to commemorate the anniversary of their fight against integration.

So, when posters for the Peace March in Vidor in memory of George Floyd started circulating, people were naturally suspicious.

People feared it was a setup.  "Texas people know if you're Black you don't even stop for gas in Vidor."  People doubted whether the organizer was even real.

She is and she accomplished something amazing.

At an event in which she thought 30 people might show up, 150-200 people braved the Texas heat and humidity to show solidarity.  While predominantly white, there were a good number of African American participants.   They came from Vidor, they came from the nearby communities, they came from Houston.

They held signs, listened to speakers, marched around the circular sidewalk and chanted.  They closed by kneeling for eight minutes and forty-six seconds, the amount of time that Officer Chauvin's knee was on George Floyd's neck.  Black volunteers read the transcript of Floyd's pleas while they knelt in silence.

Sure, there were counter-protestors.  One small group stationed themselves at the entrance to the park's parking lot and displayed a prominent sign proclaiming "Vidor Only Kneels to God!"  Several of these protestors carried rifles and shotguns.  Another group circled the parking lot displaying the Confederate flag.  Only one counter-protestor ever approached the group or engaged them.

Police had a light presence, if nothing else monitoring the situation between the protestors and the agitators.

In all, a very successful peace march was held in the most surprising place.  A minor miracle.

Maybe the organizer, Maddy Malone is right. "My generation is reaching to break the cycle."  If they can, we all have reason to hope.  Maybe it's time for a lot of people to start re-evaluating their thoughts on the youngest generations.  When it matters, when there is injustice to be fought, when there are powers that need to be held accountable, they are showing up.  They are risking excessive force, pepper spray, rubber bullets, bean bag rounds, and flash grenades to keep protesting to keep pushing for change.

Look what has been accomplished in 10 days of sustained protests:
We're having real conversations about race, about police power and accountability, about difficult issues.

There's reason for hope for lasting change through all this and that would be wonderful.  Change is not always pretty, it can be ugly and it can be scarring.  But it is necessary.  In many ways, this change is more like finally addressing a scab that has never fully healed.  We as a nation cannot move forward unless we truly address our past for what it was.  Not smoothing over it with lies like the "Lost Cause" of the South.  Not pretending like we've already moved past it.  But actively owning up for it.

And if a BLM rally can be successful in Vidor, Texas, we might just be really starting that process.
Posted by Mitch at 3:37 PM

Email ThisBlogThis!Share to TwitterShare to FacebookShare to Pinterest
Labels: Change