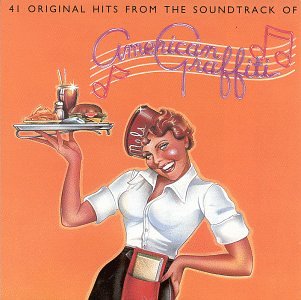 When you are a kid, the foundations of your musical taste start with the music that your parents listened to.  The album was one such album that played a big part in my childhood.
And, it is, without a doubt, the greatest movie soundtrack ever assembled.
It's because of this album I know Wolfman Jack.  The name of some instrumental tracks like Green Onions.
I learned tight harmonies from girl and guy doo wop groups.  To practice and perfect a mean false with songs like Little Darlin' and Since I Don't Have You.
This was my introduction to rock and roll, which remains one of my favorite genres.  And below is one of my favorites from the album.
Posted by Mitch at 4:17 PM