When NASCAR tells you the flag is racist, it just might be racist.  To quote Bill Engvall, here's your sign. 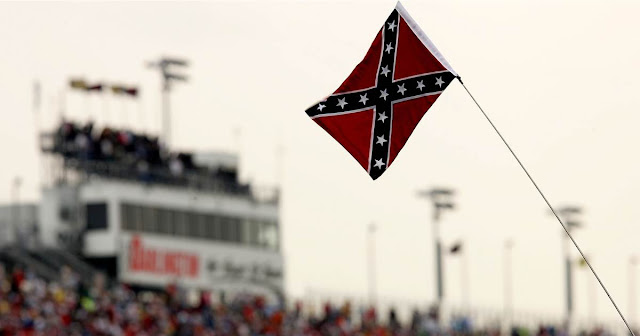 This should not come as a surprise to anyone following the sport. In 2015, then CEO and Chairman Brian France referred to the flag as an “offensive and divisive symbol.” He subsequently implemented a program at all racing events in which fans could trade a Confederate flag for an American one.

The ban comes just days after the circuits only African American racer, Darrell “Bubba” Wallace, called for the flag’s ouster. Regarding the ban, Wallace would tell Fox News, “Hats off to NASCAR. … It was a huge, a pivotal moment for the sport - a lot of backlash but it creates doors that allow the community to come together as one.”

To CNN - “No one should feel uncomfortable when they come to NASCAR to race. So it starts with Confederate flags. Get them out of here. They have no place for them.”
So, really, it's time to take a hard look at the Confederate Battle Flag and own up to what it really stands for.
First, our understanding of its history is all messed up.  It's not the flag of the Confederacy.  It was a battle flag, not the official flag of the Confederacy as a whole.  The first official flag looked like this: 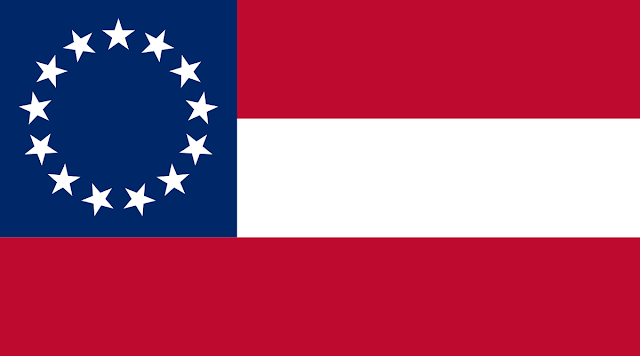 The Stars and Bars that many in the South are so affectionate for was a square battle flag.  The battle flag was so popular and the official flag was so easily confused with the American flag, it was adopted as a small section of the official flag, the square stars and bars on a white flag.  The full flag that we all know and are discussing now was the CSA Naval Jack, from 1863-1865 or the battle flag of the armies of Northern Virginia or Tennessee.
Second, it was a flag for a period of the south that only existed for five years.  The Confederacy only existed from 186 through 1865.  Why is that period of five years the one that we want to use to remember the South?  Why of all things have we tied Southern heritage to the Confederate States of America?
The history of the Confederate Naval Jack and the statues and monuments that are being finally torn down reveal a lot about that.  Like the statues and monuments that only started being erected during Jim Crow and the Civil Rights era, the Rebel Flag only really resurfaced in America after World War II.  Eighty years after the Civil War.

The flag was first use in 1948 by Strom Thurmond and the old Dixiecrat Political Party, as a symbol of their "state's rights" campaign.  State's rights to keep from desegregating and integrating the schools.  It then became a symbol of Jim Crow, of separate but equal, of white's only.
The Rebel flag was displayed in front of each school where segregation was attempted.
It has been associated with the Klu Klux Klan.   It's associated with the Nazi Party of America.  It's associated with Neo-Nazis across the globe.  Germany rightly banned the Nazi flag and Nazi paraphernalia after World War II.  So what do Neo-Nazis and other Nazi sympathizers display?  The Rebel flag.
So, again, why are we so insistent on keeping the South associated with it, if it's not for racist purposes?  Why do we view Southern heritage so tied to that flag, unless it is truly a reminder for "blacks to know their place?"
There are so many other things about the South we could celebrate.  How about we remember the 100,000 or so Southerners that fought for the Union army?  How about we celebrate Southerner abolitionists?  Or the great diversity of the South that has always existed?  How come we don't teach about people like Cassius Clay?  The real story of Harriet Tubman?
The South has so much more that can be celebrated. We make better food, we tell better stories, we create great art, we have some of the best music, and we have a lot in our history that should make us proud.
Why are we so insistent on celebrating the parts that should forever shame us?
Posted by Mitch at 10:14 AM

Email ThisBlogThis!Share to TwitterShare to FacebookShare to Pinterest
Labels: Racism