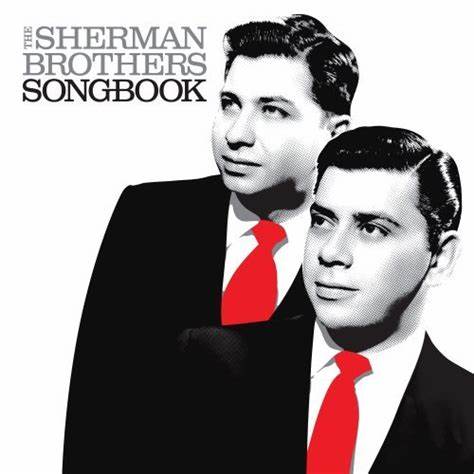 '
Though this cd was not released until 2009, it is the perfect encapsulation of my musical education as a child.  And it was likely not only me.  In the Playbill article for Robert Sherman's obituary, the writer included "If you don't know at least a half dozen Sherman songs by heart, there's a very good chance you were never a child."  The reason for that quote is the incredible volume and quality of their songs.
The Boys, as Walt called them, were his go to songwriting duo.  When he needed songs for an animated feature, for a live-action hybrid, for a theme park ride, for a live action film, this was the team he relied on.   In their repertoire:
The Wonderful World of Color (from Disney's Wonderful World of Color TV show)
The Tiki, Tiki, Tiki, Tiki, Tiki Room (from the Enchanted Tiki Room)
It's A Small World (from the ride)
A Spoonful of Sugar
Supercalifragilisticexpialidocious
Feed the Birds
Chim Chim Cher-ee
Winnie The Pooh
I Wan'na Be Like You
The Wonderful Thing About Tiggers
There's a Great Big Beautiful Tomorrow
They would go on to work on projects for other studios, that have just as fond a memory for families and kids who saw them at just the right age.  Tom Sawyer and Huckleberry Finn musicals from the 1970s.  Charlotte's Web.  Chitty Chitty Bang Bang.  Snoopy Go Home.
From the Sherman Brothers, I developed a fondness for intricate word play, particularly with made up words.  Supercalifragilisticexpialidocious.  Gratifaction.  Fortuousity.  Higgitus-figgitus.
I also developed a great appreciation for point and counterpoint.  The Boys were great at it.  To the point where some of their songs with point and counterpoint melodies can be played at the same time as their other songs with point and counterpoint melodies.
The above combined with tight and straightforward harmony, meant their songs got played and sung a lot in my childhood.
This is the foundation of my musical development.
To that end, I've included a special version of probably their most famous song, It's A Small World, containing the third verse that no one has ever really heard.
Posted by Mitch at 2:59 PM