Ten Albums #7: Be Still My Soul 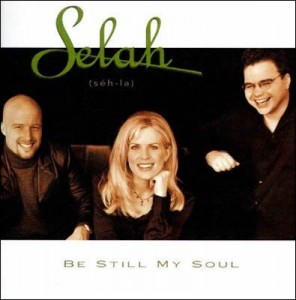 This album filled a need I didn't know I had.  Growing up in the Baptist church, I had an appreciation of old hymns.  I know the Heavenly Highway.  I know my way around the 1975, 1991, and 2008 Baptist Hymnals.  Their songs make up a large part of the fabric of who I am.
But, it is also true to say, that the way many of those hymns are presented can be very dry.  Simplistic and rote.
Selah breathed new life into this material.  Missionary kid siblings Todd and Nicole Smith and friend Allan Hall, brought influences of gospel, of soul, of Subsaharan Africa into these traditional hymns and found new depths.
The focus on beautiful arrangements, very tight harmony, and excellent vocals lifts this album among other Christian gospel music.  For this album, they didn't have much of a budget, leaving it largely just their voices and a piano.  And this remains one of their best albums.
The group would also release their sheet music for the album.  Since it was just a piano playing, they released exactly what is heard on the disc, not the simplified or approximated versions that are normally released.  This put in me an even greater appreciation for what they were able to accomplish.
Posted by Mitch at 3:01 PM

Email ThisBlogThis!Share to TwitterShare to FacebookShare to Pinterest
Labels: Be Still My Soul