The Sixth Day of Christmas 2022

The Feast of The Holy Family 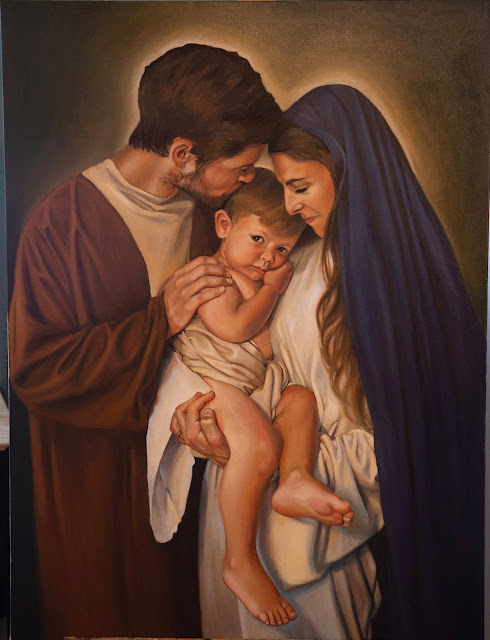 "Every year Jesus’ parents went to Jerusalem for the Festival of the Passover. When he was twelve years old, they went up to the festival, according to the custom. After the festival was over, while his parents were returning home, the boy Jesus stayed behind in Jerusalem, but they were unaware of it. Thinking he was in their company, they traveled on for a day. Then they began looking for him among their relatives and friends. When they did not find him, they went back to Jerusalem to look for him. After three days they found him in the temple courts, sitting among the teachers, listening to them and asking them questions. Everyone who heard him was amazed at his understanding and his answers. When his parents saw him, they were astonished. His mother said to him, 'Son, why have you treated us like this? Your father and I have been anxiously searching for you.' 'Why were you searching for me?' he asked. 'Didn’t you know I had to be in my Father’s house?' But they did not understand what he was saying to them.

Then he went down to Nazareth with them and was obedient to them. But his mother treasured all these things in her heart. And Jesus grew in wisdom and stature, and in favor with God and man."

Luke 2:41-52
Today for the Sixth Day of Christmas, we look at the Feast of the Holy Family.  It would normally be on the Sunday between Christmas and New Year's Day, but that will be New Year's Day.
We know precious little about the life of the Holy Family.  Of the accounts that we have of Jesus's family life before his ministry, the account of him at the temple is the most complete.  We further have mentions of his circumcision and presentation and the family flight to Egypt and return to Nazareth.
Otherwise it would seem that Jesus's early life was fairly uneventful.  From Matthew, we see that early in Jesus's ministry, it is asked, "Isn't this the carpenter's son?  Isn't his mother's name Mary, and aren't his brothers James, Joseph, Simon, and Judas?"  Had Jesus performed more miraculous signs early in his life, surely those would have been known.  He would have already had a reputation.  As it was, he began developing his reputation with his ministry.
This means we have a lot of questions about his early life.  We don't know his family's relationship with their relatives.  Were Mary and Joseph shunned for their early, unplanned pregnancy?  For the rumors and shame they brought on the family?  Beyond Zechariah, Elizabeth, and John, did anyone else believe them?  Did they have anyone they could share their burdens, their questions with?
How did the time in Egypt affect the family?  What was their reception when they returned?
How did Jesus get along with his siblings?  Were they older siblings, as assumed in the denominations that perpetuate the virginity of Mary, or were they younger siblings trying to live up to Jesus's example?
How often did Joseph and Mary feel it was too much to handle, too much to bear?  How often did they worry about the life of the child they were caring for?  How often did they get angry at him for doing the things all normal children do?  How often were they frustrated with him, hurt by him?
We don't know how long Joseph lived into Jesus's life.  We assume that he may have passed away before Jesus's ministry began, because we never hear about him after the account at the temple.  Is this because he passed away or because he didn't support Jesus's ministry?  How long did Jesus apprentice under Joseph as a carpenter?  What was their relationship like?  Was there a bit of contention there?
Like many things, we have a tendency to sanitize the family life of Jesus because of an assumption of what holiness looks like.  We assume because this was God's plan everything was ordered and peaceful.  We assume the absence of chaos and stress.  The absence of storms.

We forget that God's plan for Mary and Joseph immediately subjected them to rumors.  Immediately cast them into chaos.  The promise was not that the storms wouldn't come, it's that the one who calms the storm was going to be with them.
So for everyone in this season whose life is a mess...
Whatever your family life may look like...
Whatever your past has held...
Whatever your future may bring...
Remember, it's into these lives that God steps in and works.  In the midst of it all, in the uneventful and the chaotic alike, may you find him.  May you treasure him in your heart.  May you grow in wisdom and stature, and find favor with God and man.
Posted by Mitch at 11:36 AM