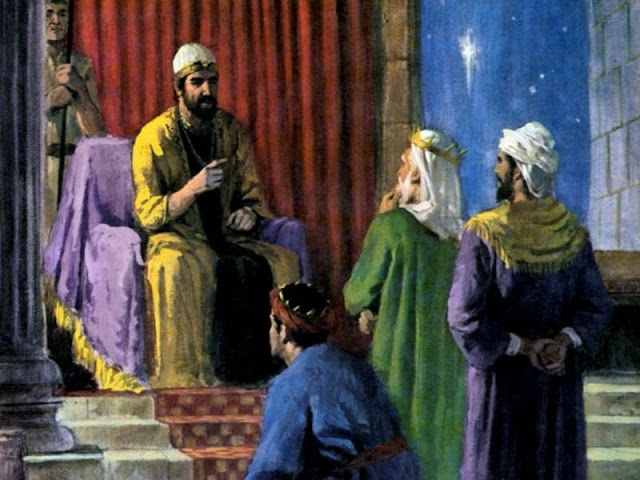 "In the time of King Herod, after Jesus was born in Bethlehem of Judea, wise men from the East came to Jerusalem, asking, "Where is the child who has been born king of the Jews? For we observed his star at its rising, and have come to pay him homage."

When King Herod heard this, he was frightened and all Jerusalem with him; and calling together all the chief priests and scribes of the people, he inquired of them where the Messiah was to be born. They told him, "In Bethlehem of Judea; for so it has been written by the prophet:
'And you, Bethlehem, in the land of Judah, are by no means least among the rulers of Judah; for from you shall come a ruler who is to shepherd my people Israel.'"
Then Herod secretly called for the wise men and learned from them the exact time when the star had appeared. Then he sent them to Bethlehem, saying, "Go and search diligently for the child; and when you have found him, bring me word so that I may also go and pay him homage."
When they had heard the king, they set out; and there, ahead of them, went the star that they had seen at its rising, until it stopped over the place where the child was. When they saw that the star had stopped, they were overwhelmed with joy. On entering the house, they saw the child with Mary his mother; and they knelt down and paid him homage. Then, opening their treasure chests, they offered him gifts of gold, frankincense, and myrrh. And having been warned in a dream not to return to Herod, they left for their own country by another path."
Matthew 2:1-12
It's important to counter the Magi's presence in the story with the people that they questioned first - King Herod and his advisors.  Their reaction is so completely opposite to that of these wise men, that they cannot be ignored.
Primarily, Herod serves an important function in the story because it grounds the Nativity in history.  Like most of Luke's writings, it provides a verifiable historical context to the Gospel account and allows us to compare and prove Jesus's place in history.  Historians agree that Herod in many respects had a very successful reign.  Ethnically Idumaean, or Edomite, but at least nominally of Jewish practice, he increased the land he governed from Palestine to parts of modern Jordan, Lebanon and Syria, constructing fortresses, aqueducts and amphitheaters.
His connections to Julius Caesar and Caesar Augustus would provide  both comfort and strife.  He was given the title “King of the Jews” by Caesar because of the Jewish population he ruled, to their consternation.  Like most kings, he wanted more and more power.  This pushed him to rule with an iron fist and led to increasing levels of paranoia.  He executed many of his own family to stave off what he saw as threats to his rule.
He has been described as "perhaps the only figure in ancient Jewish history who has been loathed equally by Jewish and Christian posterity," "the evil genius of the Judean nation," and as one who would be "prepared to commit any crime in order to gratify his unbounded ambition."
Perhaps now we can understand better why news of a new Jewish king being born would be so troubling to him.  Jesus represented the one thing he feared the most in the world: losing his position of power and authority.
If Herod's response to this baby king is one of fear and anger, his advisors response seems to be one of apathy.
When the wise men ask Herod where the child was prophesied to be born, he then turns to the chief priests and scribes.  Their response, or lack thereof, is the most interesting part of this account.  Of course they of all people would know the scriptures, and would know the prophecies.  They knew everything about the coming Messiah.  They could have answered any question about the Messiah that had been posed to them.
They simply had no desire to seek him out.

Think about it.  They saw the same star in the heavens as the wise men.  They saw it centered over Bethlehem.  They had to know something significant was occurring in the stars.  The Magi's story would have filled in important pieces of their own observations.
But for whatever reason, they didn't care enough to find out exactly what was happening.
We don't know if it was fear of Herod that kept them from acting.  That would have been a perfectly rational response.  They knew everything Herod did to keep power, and would have been rightly afraid of his reaction.
Perhaps they were so wrapped up in their own power and position that they never even paid attention to the star.  Perhaps even after hearing the story of the Magi, they no longer had any inclination to seek the Messiah.  After all, God had been silent for 400 years, why would he show up to outsiders and not them?
For whatever reason, their response to the Magi's tale was silence and inaction.  They did nothing.  They heard of the possibility of the arrival of the Messiah and they flat out ignored it.
It's a stark reminder for us to not ignore the signs around us.  To not ignore where the Lord is working around us.
To expect Him.  And to seek Him out.
As wise men still do.
Posted by Mitch at 12:59 PM