Yuletide - The Innkeepers - Make Him Room

"No beautiful chamber,
No soft cradle bed,
No place but a manger,
Nowhere for His head;
No praises of gladness,
No tho't of their sin,
No glory but sadness,
No room in the inn." 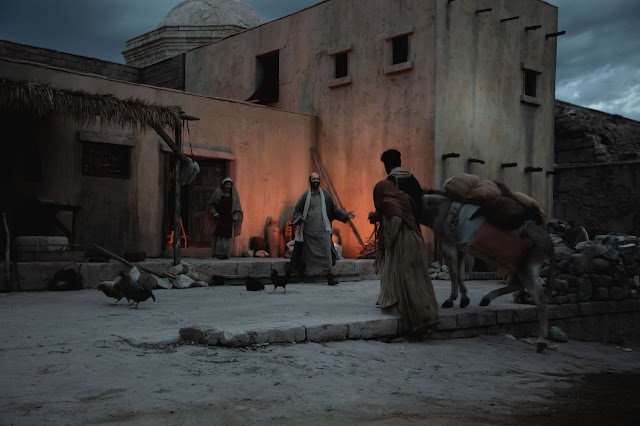 "In those days a decree went out from Caesar Augustus that all the world should be registered.  This was the first registration when Quirinius was governor of Syria.  And all went to be registered, each to his own town.  And Joseph also went up from Galilee, from the town of Nazareth, to Judea, to the city of David, which is called Bethlehem, because he was of the house and lineage of David, to be registered with Mary, his betrothed, who was with child.  And while they were there, the time came for her to give birth.  And she gave birth to her firstborn son and wrapped him in swaddling cloths and laid him in a manger, because there was no place for them in the inn."

Our Christmas story often has another set of characters that pops into the story next.  A set of innkeepers that keep telling Mary and Joseph that they have "No Room."  The process is repeated over and over until one innkeeper finally makes room for them in his stable or barn.

It makes for great pageantry.  Perhaps we can even see it best in the annual festival of Las Posadas, or The Inns, celebrated in Latin American countries and cultures.  Las Posadas derives from the Spanish word posada, meaning lodging or accommodation, here referring to the inn in the Nativity story.  Celebration of this 400 year tradition starts with two actors dressing as Mary and Joseph, leading a procession to certain houses designated as inns, usually those at the end of a street.  The procession is headed by a leader carrying a luminaria and can often contain other players of the Nativity story (angels, shepherds, etc.).  The procession makes its way from house to house, singing carols in hopes to have a place to stay.  They are initially met with "no posada," no room, until the end of the street.  There, the residents of the houses respond by singing a song, recognizing Mary and Joseph, and allowing the procession to enter.  The procession comes in and kneels to pray before a Nativity scene.  At the end of each night, carols are sung, children break open a star shaped piñata, and everyone sits for a feast.  This is repeated throughout the nine day period, with a new house each night accepting them in for the festivities.

Despite the longevity of this celebration and the widespread nature of the idea of the innkeepers, this is not necessarily how it went in Mary and Joseph's day.  The word translated as “inn” in the scripture can also be translated as an  upper, finished room of a house.  If this were the intent, then our innkeeper could have actually been relative of Joseph.  He didn’t have any place for Joseph and Mary to stay upstairs, as would be traditional.  Instead they had to stay in the cold, unfinished lower part of the house where the animals would be.  In a cave that would have been used for the animals.  Exposed to the weather, to the stench, to the filth of being with the livestock.

This makes a lot of sense in Jewish culture.  If Joseph had relatives still in Bethlehem, that is where he would seek lodging first.  Hospitality was of the utmost importance, and it would be especially extended to family.  If Joseph had no family left in the area, then he would be seeking shelter at an inn as we think of it.

Either way, the innkeeper should not be blamed for the lack of room. The city was overwhelmed by the census, not because of an inhospitable innkeeper or the like.  Rather because of circumstance and so that prophecy could be fulfilled.

The lesson still remains the same.  No matter the reason for the crowding, the call is to make room.  To find a place.

Nearly every example Jesus gives us of meeting the needs of our fellow man comes at an inopportune time for the person rendering aid.  The Good Samaritan hurrying off a treacherous road, interrupted by the dying man needing aid.  Not allowing followers to bury their dead or say farewell to those at home.  Leaving the 99 to find the one lost sheep.

Jesus' ministry was filled with interruptions.  To feed his followers, to heal their infirmities, to dote on their children.

Our lives can be so overcrowded.  With school, with work, with family, with church.  Have you ever been so overburdened with church activities that you miss God all together?  We have to be able to make room for those moments when God is looking to step in and wants us to join him.  For God to truly direct our paths and move us into tangents, into distractions, into diversions.

To meet people and God where they are.

To find room for them in our lives.