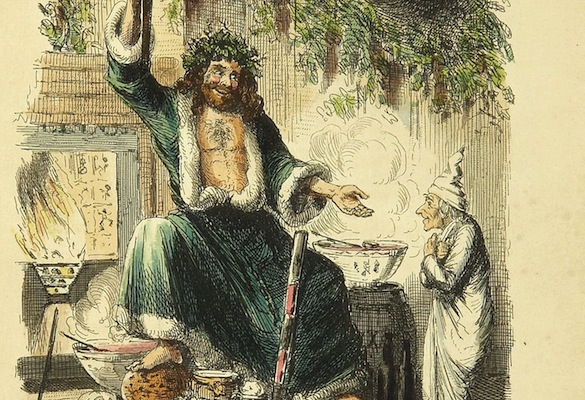 A Christmas Carol is a story that gets a lot of play in our house during this time of year.  We have the recent Jim Carrey motion capture version that Jamie used in class, as it is one of the most faithful adaptations.  We watch Mickey's Christmas Carol for Scrooge McDuck (lovingly homaged in last year's Ducktales Christmas episode).  We watch the derivations of the story, like Rod Serling's haunting Carol for Another Christmas or the noir Cash on Demand.  And of course, we watch the best adaptation of them all - Muppet Christmas Carol.  I'm not joking on that last part.  Michael Caine has to be one of the best Ebeneezer Scrooge's ever because he plays the role with such sincerity.  The perfect straight-man while surrounded by Muppets.  Someday soon, we'll have to catch the Indiana Repertory Theater's annual version. (Jamie was this close this year to going with a class).

The ills of Want are quite apparent.  Want represents the need we see all around us.  Homelessness, hunger, poverty, and neglect.  All social ills that we recognize and prioritize trying to address.  "Our people must learn to devote themselves to doing what is good, in order to provide for urgent needs and not live unproductive lives."  Titus 3:14  We do so, because we recognize the dark ends that Want leads to:  disease, abuse, suffering, desperation, and death.  All ends we would seek to avoid.

Email ThisBlogThis!Share to TwitterShare to FacebookShare to Pinterest
Labels: 2022, A Christmas Carol, Christmas, Ghost of Christmas Present, Ignorance and Want