Yuletide - The Twelve Days of Christmas, An Overview

"On the twelfth day of Christmas, my true love gave to me..." 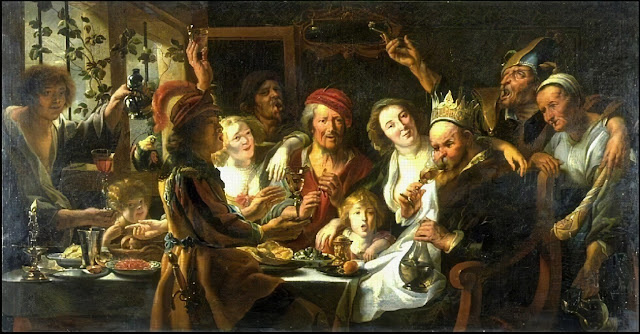 In preparation for the series of posts beginning December 25, I post this reminder of what the Twelve Days of Christmas actually refers to.

Without proper context, you would think this could be an accurate use of the term.  The modern Christmas season has come to be defined officially as the period from Black Friday after Thanksgiving through Christmas Day.  Unofficially, it seems to begin the day after Halloween, or All Saints Day.  This is largely because the economic component of Christmas is so important, so the focus has shifted to the shopping related days before Christmas.  We can promote this shopping season through decoration, through music, through events leading into Christmas Day, and then get everyone to return their focus to work and productivity after that one singular day.

But, while this might be our modern focus, we know this is not the proper usage, nor the correct time period for the Twelve Days.

Those two bounds would be the markers because it reflects the entirety of the Nativity of Christ.  Christmas Day would celebrate the birth and the stable.  The shepherds arriving, angels appearing, and the spreading of the gospel.  Epiphany, or Three Kings Day, would mark the arrival of the Magi, completing the Nativity story.

The origins of this practice date back to 567 AD, where the Council of Tours proclaimed this twelve day period between Christmas Day and Epiphany as a sacred and festive season.  Advent, or the weeks leading into Christmas, would be the more somber and reflective preparation for the feast.  But Christmastide or Twelvetide would be the celebration and the feast.

With that in mind, traditionally, decorations for Christmas, like the Christmas tree, would not go up until Christmas Eve and then would remain up through the celebration.  They would only be taken down between Twelfth Night, the eve of January 5, and the morning of Epiphany, January 6.

Likewise, gifts may have been given each of the twelve days of this period.  This provides the inspiration for the song.  Despite what you may have read, the song is not a catechism song, with encoded symbols for Christian theology.  The symbols can be seen, but could be done with any gifts assigned to the numbers.  In other words, the numbers there are all that matter.  Rather, the origins of the song are more likely simply in a children's memory and forfeit song, given the cumulative nature of the verses.  It would be sung and repeated to see which child forgot one of the gifts first.

Over time, celebrations have developed for each of the twelve days, whether they are feasts for the saints, or more secular and traditional holidays.  I've included a snapshot below for each of the celebrations, and will be writing about each day this season starting on Christmas Day.

A celebratory season indeed.  And an opportunity for a lot that we in our faith forget over the Christmas story.

Email ThisBlogThis!Share to TwitterShare to FacebookShare to Pinterest
Labels: 2022, An Overview, Christmas, The Twelve Days of Christmas, Yuletide