The Fifth Day of Christmas 2022 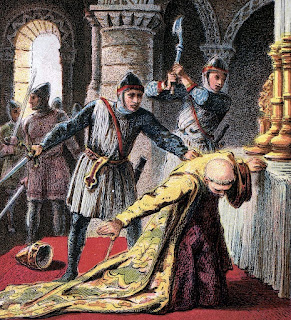 On the fifth day of Christmas, we talk about murder. Specifically a murder that happened 851 years ago. The Murder in the Cathedral, when the king’s men, acting on the “suggestion” of King Henry II put Archbishop Thomas Beckett to death for his defiance of the king.

Becket had once been a trustee advisor to the king. He served as Lord Chancellor to King Henry and had even fostered the king’s son Henry as was the custom of the time. Becket as chancellor had focused on strengthening the secular governmental position. The expectation was that he would strengthen the tie between the church and the state with his appointment to Archbishop.

Becket, however, saw things differently. And saw the importance of a distinction between the church and the crown.  He would repeatedly fight Henry on the jurisdiction of the English courts over church officials, the independence of the priests, and the influence of Rome. He became a fugitive and an exile to avoid the king’s ire.

Eventually it was a breach of protocol that proved to be the final straw. King Henry had the Bishops of York, London, and Salisbury crown the heir apparent in 1170. Seeing this as a flagrant disregard of his privilege as the Archbishop of Canterbury, Becket excommunicated all three of them in November 1170.

It’s in response to this excommunication we have the scene that has transcended history. When told the news, Henry is said to have replied to his men, “What miserable drones and traitors have I nourished and brought up in my household, who let their lord be treated with such shameful contempt by a low-born cleric?" Or perhaps more famously, “Will no one rid me of this turbulent priest?”

His men saw this as a direct order and carried out the execution swiftly. On December 29, 1170, four of the king’s knights traveled to Canterbury to force Becket back to Winchester to account for his actions. From all accounts of the story, they left their weapons outside and only went back to retrieve them once Becket refused to accompany them. When the knights left to retrieve their weapons, the other monks at Canterbury tried to bolt the doors, but Becket refused. “It is not right to make a fortress out of the house of prayer!”

When the knights returned, they asked, “Where is Thomas Becket, traitor to King and country?” Becket replied, “I am no traitor and I am ready to die.” And with that, the knights went to work. It took several blows, but the Archbishop was murdered there on the cathedral floor, in a spot near a door to the monastic quarters, the stairs to the crypt, and the stairs to the quire.

“For the name of Jesus and the protection of the Church, I am ready to embrace death.”

Swiftly after his execution, Becket started being recognized as a martyr. And by 1173, he had been canonized as a saint by Pope Alexander III. December 29 has become his feast day.

We have a lot to learn from Becket today and in many ways are in large need of more religious leaders that will follow in his example.

I would be remiss if I didn’t mention which part of his fight we can and should do without first. We have no need for the desire to keep church officials out of the secular court system. This has done nothing but create huge problems for the church throughout its existence. It is the ugly stain behind the Catholic Church and Southern Baptist Convention sexual abuse scandals on the macro level and the complicity in abuse of local churches at the micro level. When churches misuse and distort the doctrines of grace and repentance to cover up for abuse by keeping it as a matter for the church to govern, it is sin. Plain and simple. For believers, God instituted both government and the church, and gave specific purposes to each. To circumvent this system runs counter to his design.

What we do need, and need desperately, are religious leaders that will fight any erosion between church and state. That will fight to keep the church set apart, distinct, holy. That will not be swayed by the promise of power.

I’m sure there are pastors who believe they are standing in that gap. They are standing up to the current “corrupt” government in their eyes. They may even chuckle or more at minced epitaphs like “Let’s go Brandon.”

It’s easy to oppose something when it’s not your side.

But how many of those same leaders were calling out the actions of the previous administration when they were improper? How many leaders are still trying to curry favor with that president in hopes of his return to office and the power and influence it will bring? How many religious leaders sold their souls for Supreme Court Justices?

Forget leaders, how many Christians sold their souls so their team could be in power?

No doubt there are leaders that are standing in the gap, making their opposition known and like Becket trying to keep the church set apart. But in our largest Protestant denomination, in the most “powerful” Christian block, the one closest to home, we are not seeing it.

Today, on the Feast of Thomas Becket, that should be a somber reflection.

“Now is my way clear, now is the meaning plain:
Temptation shall not come in this kind again.
The last temptation is the greatest treason:
To do the right deed for the wrong reason.”