"This is how the birth of Jesus the Messiah came about: His mother Mary was pledged to be married to Joseph, but before they came together, she was found to be pregnant through the Holy Spirit.  Because Joseph her husband was faithful to the law, and yet did not want to expose her to public disgrace, he had in mind to divorce her quietly.

But after he had considered this, an angel of the Lord appeared to him in a dream and said, 'Joseph son of David, do not be afraid to take Mary home as your wife, because what is conceived in her is from the Holy Spirit.  She will give birth to a son, and you are to give him the name Jesus, because he will save his people from their sins.'

All this took place to fulfill what the Lord had said through the prophet: 'The virgin will conceive and give birth to a son, and they will call him Immanuel' (which means 'God with us').

When Joseph woke up, he did what the angel of the Lord had commanded him and took Mary home as his wife.  But he did not consummate their marriage until she gave birth to a son. And he gave him the name Jesus." 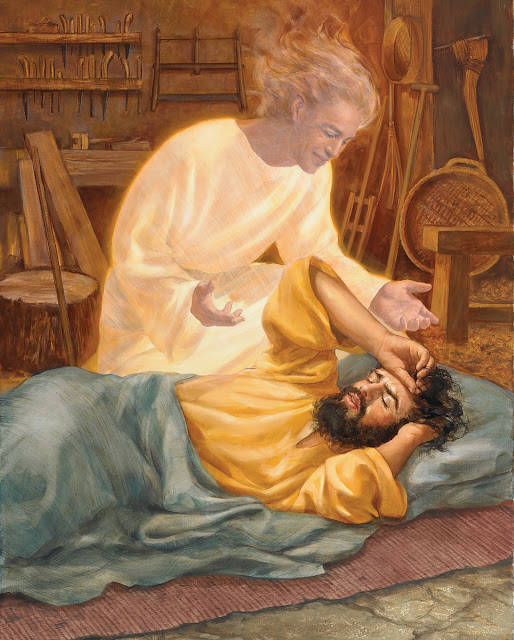 Since becoming a father, I've thought a lot about Joseph at Christmas.  The focus of what becoming a father will do to you.  Understanding his position in the story just a little bit better.
He is certainly an enigmatic figure.  We know less about him than we do of Mary and he has a far smaller written role in the life of Jesus than she does.  We know his lineage, tying him to the house of David and requiring him to go to Bethlehem to be taxed/counted.  We know he was a carpenter, or craftsman.  We know he was a just and faithful man.  Beyond that, all we know of him is what happens to him in the early chapters of Matthew and Luke.  The birth, the flight to Egypt, and Jesus at the temple.  From there his story ends.
Some assume that Joseph died before Jesus' ministry ever started.  We know he was not present at the Crucifixion.  If he were, Joseph would have assumed care of his son's body, and Jesus would not have asked John to watch over his mother, Mary.  When exactly Joseph died or by what cause is unknown.
In the greater apocrypha, he is portrayed as an old man, even as old as 90 years old at the time of his betrothal to Mary.  These portrayals are found in the texts that maintain the perpetual virginity of Mary.  Accordingly, James, Joses, Simeon, and Judah/Jude/Judas, and their sisters are claimed to be children from a previous marriage, the step-siblings of Jesus if you will.
Modern protestant view tends to portray him a little younger.  Closer in age to Mary, still in the prime of his life.  That James, Joses, Simeon, and Judah would be the children of Joseph and Mary.
Whatever the additional details of his life, I can't help but place myself in his position.  The mix of emotions he must have felt when he learned Mary was pregnant.  The awe of the angel's statement.  All leading him to a dark stable, on a cold night, holding this little child that has been entrusted to his care.  Knowing the greatness this child is called to.
There's a song written a few years ago by Mercy Me called Joseph's Lullaby.  A song written from the perspective of Joseph as he sings Jesus to sleep.  It has a line that has haunted me since the first time I heard it.

Can You feel the weight of Your glory?
Do You understand the price?
Or does the Father guard Your heart for now
So You can sleep tonight?

I believe the glory of Heaven
Is lying in my arms tonight
But Lord, I ask that He for just this moment
Simply be my child

Go to sleep my Son
Baby, close Your eyes
Soon enough You'll save the day
But for now, dear Child of mine
Oh my Jesus, Sleep tight

All the questions that come from looking at an infant child who is the Son of God.  Finally realizing the weight of that statement.  And Joseph's simple request - for one moment, can he just be mine?  Everything else will come, everything else will happen, but can he just be mine right now?  Can he be spared the crushing weight of expectation for one minute?
How often did Joseph and Mary wish to spare Jesus from his destiny?  Did they try to talk him into a safer life?  How often did they pray for his protection, even at the expense of his mission?
How often did they beg God to spare Jesus from His plan?
I know this is probably not the most appropriate Christian response, but looking over my children and knowing what I would do to protect them, I can imagine the answer is often and frequently.
I know kids need to learn overcoming difficulty and hardship, but every parent, if they knew their children would face real suffering, would face terminal illnesses, agonizing pain, overwhelming hardship, would beg to take their place.
These thoughts take on even greater significance as we are now waiting in the adoption process.  I can imagine the same questions for the child we will adopt.  Can they be free of the brokenness inherent in adoption for just one moment?  Can they just be our child, without the baggage that will be carried around with them?
It puts new perspective on what it must have been like as the adoptive father in this story.  To be the one appointed to watch over Jesus.  To raise him, to teach him a trade, and to set him out on his ministry.
I think there is a little poetry in why Joseph, a carpenter or craftsman was chosen.  God the master craftsman sent his son to a carpenter to apprentice.  Picturing Joseph teaching Jesus how to create, how to restore, how to reuse.  How to repair the broken.
A picture of our adoptive Father.  What he wants to teach us.  How He restores.  How He repairs.   How He creates.
How great the father's love, indeed.
Posted by Mitch at 2:14 PM