Yuletide - The Shepherds - The Unlikeliest Heralds

"Shepherds in the fields abiding
Watching o'er your flocks by night
God with man is now residing;
Yonder shines the infant light: 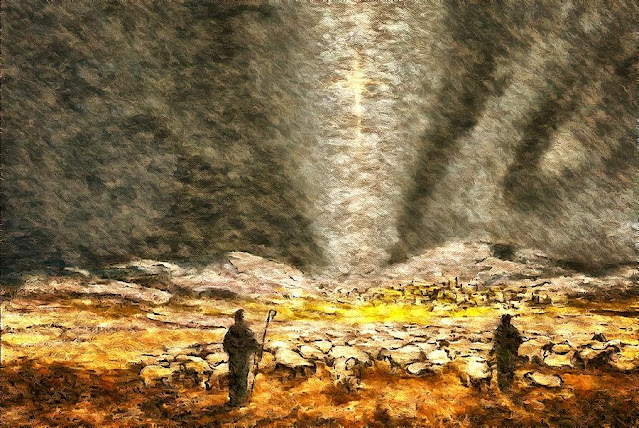 "And in the same region there were shepherds out in the field, keeping watch over their flock by night.  And an angel of the Lord appeared to them, and the glory of the Lord shone around them, and they were filled with great fear.  And the angel said to them, 'Fear not, for behold, I bring you good news of great joy that will be for all the people.  For unto you is born this day in the city of David a Savior, who is Christ the Lord.  And this will be a sign for you: you will find a baby wrapped in swaddling cloths and lying in a manger.'  And suddenly there was with the angel a multitude of the heavenly host praising God and saying,

'Glory to God in the highest,
and on earth peace among those with whom he is pleased!'

When the angels went away from them into heaven, the shepherds said to one another, 'Let us go over to Bethlehem and see this thing that has happened, which the Lord has made known to us.'  And they went with haste and found Mary and Joseph, and the baby lying in a manger.  And when they saw it, they made known the saying that had been told them concerning this child.  And all who heard it wondered at what the shepherds told them.  But Mary treasured up all these things, pondering them in her heart.  And the shepherds returned, glorifying and praising God for all they had heard and seen, as it had been told them."

Luke 2:8-20
Once Mary and Joseph have gotten settled in to the stable and the delivery begins, the scene of the Nativity story shifts to the fields outside Bethlehem.  To a group of societal outsiders, to some of the lowliest of all Israelites - the shepherds.
Shepherds stood at the bottom rung of the social ladder, along with tax collectors and dung sweepers.  The were dirty.  They were smelly.  They spent way too much time with animals.  And there were rumors about what they did with the sheep.
They were no one's desired guest.
But God.
The first people to receive the birth announcement for God's only son were shepherds.  Poor, humble, lowly shepherds.  God bypassed the priests, the Levites, the ruling class, even the middle class to send his angels directly to the most humble of them all.
We should pause and ask why.  Why send this message to the shepherds, of all people?
Perhaps because they were the ones most likely to listen.
We see it later in the story that when the ruling class was confronted with the signs of the Messiahs birth, they knew the answers, they knew the prophecies.  But they had no interest in finding out whether He had arrived.
The shepherds upon hearing the fantastic news that the promised savior had been born immediately went and sought him out.
There's also likely another, poetic reason why these shepherds in particular were singled out.  If we look to the Mishnah, the Jewish rabbinical legal-history document, we see that these shepherds were no ordinary shepherds.  For they were watching no ordinary flock.
During those times, sacrificial lambs for the burnt offerings, peace offerings, and Passover offerings were kept in the region of Jerusalem, including Bethlehem, which was just five miles south of the city. These sheep were kept outside year round and watched particularly carefully to keep them without blemish or spot. That means it is likely that these shepherds were watching over the sacrificial flock.
So you can see the beauty in the shepherds who watched the sacrificial flock being told that the Lamb who takes away the sins of the world has been born.  They are shown the next sheep to protect.  They are shown the one who will make their jobs unnecessary.
Regardless of their specific function, the shepherds remind us that the Christmas story is not just for us.  It is not just for the ones who are religiously together.  It's for the dirty.  It's for the hurting.  It's for the outcasts, the strays, the undesired.
The beauty of the shepherds is that they remind us the Christmas story is for all of us, every one.
Our part is to determine what we do with it.
Fear not, we are told, good news of great joy which will be to all the people.
Do we go and see?
Do we go tell it from the mountain?
Posted by Mitch at 10:23 AM