"Why her, she's just an ordinary girl?"

A Strange Way to Save the World, Mark Harris 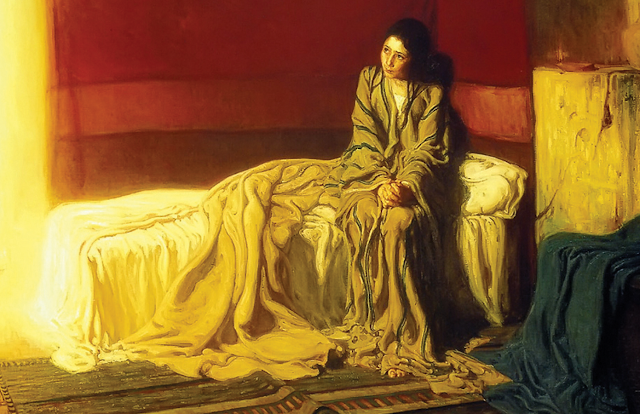 "In the sixth month the angel Gabriel was sent from God to a city of Galilee named Nazareth, to a virgin betrothed to a man whose name was Joseph, of the house of David. And the virgin's name was Mary.  And he came to her and said, 'Greetings, O favored one, the Lord is with you!'  But she was greatly troubled at the saying, and tried to discern what sort of greeting this might be.  And the angel said to her, 'Do not be afraid, Mary, for you have found favor with God.   And behold, you will conceive in your womb and bear a son, and you shall call his name Jesus.  He will be great and will be called the Son of the Most High. And the Lord God will give to him the throne of his father David, and he will reign over the house of Jacob forever, and of his kingdom there will be no end.'

And Mary said to the angel, 'How will this be, since I am a virgin?'

And the angel answered her, 'The Holy Spirit will come upon you, and the power of the Most High will overshadow you; therefore the child to be born will be called holy—the Son of God.  And behold, your relative Elizabeth in her old age has also conceived a son, and this is the sixth month with her who was called barren.  For nothing will be impossible with God.'  And Mary said, 'Behold, I am the servant of the Lord; let it be to me according to your word.' And the angel departed from her."

Mary rightly receives a lot of attention at this time of year, but I wonder if we often gloss over what makes her story so amazing.  We focus so much on the miracle, on the extraordinary circumstances and the details of the birth that make it so amazing, but do we pay attention to the character of Mary and how we should relate to her?
Because, from what I see of the story, Mary was the most ordinary of girls.  We know little of her life from the gospel account.  We know she was living with her family in the betrothal stage of her marriage to Joseph.  At the time, Mary could have been betrothed as early as age twelve and there are apocryphal accounts that she was only 12-14 at the time of the Annunciation.  We know that she was a virgin at the time, that she was faithful.  We know that she was from Nazareth.
Nazareth at that time was a city of no prominence.  Though it is mentioned in the Gospels, there are no contemporaneous mentions of Nazareth.  It does not appear in other writings until 200 AD.  It was a town of around likely 400-500 people.  A town in the hills of Galilee.  A poor farming town.  It was the country.  To the point where it was even asked "Can anything good come out of Nazareth?"
An ordinary girl, in an ordinary town, in the most ordinary of circumstances.
Until God...
Until God steps into the most ordinary of circumstances to do the extraordinary.
I know there are those that would venerate Mary.  To make her sinless.  To make her a perpetual virgin.  To make her already extraordinary, set apart by God.  And while I don't want to deny their beliefs, I think that misses the mark of her story.
She's supposed to be us.  To represent what God could do through any of us, if we found his favor.  If we were willing to say "let it be to me according to your word."  That no matter our beginnings, no matter our location, no matter our circumstances, God can make something wonderful.  Something miraculous, something extraordinary.
It's Mary's statement, "let it be to me according to your word," that reveals her extraordinary character.  Her willingness to follow God wherever He led her is her most amazing attribute.  Because what the angel was telling her would bring shame on her and her family.  At its most benign, it made her the subject of gossip and whispers.  It brought slander to her character.  It could mean the dissolution of her betrothal.  If that happened, it could make her an unfit candidate for marriage of any kind, leaving her destitute, should her family refused to keep her.  At the absolute worst, it could mean her death for her "unfaithfulness."
We don't see Mary fight back against any of this.  She simply says, "let it be done."
To have that kind of faith!
It can be so hard for us to serve when it's merely mildly inconvenient.  We're so concerned God is going to send us to Africa or China if he calls us, that we're turning away from even going across the street.  We hold on to so many reasons holding us back - family, jobs, status, comfort, prejudice, tradition, relationships - when God is waiting for us to cut through it all with a simple, "Here am I, send me!"
Or perhaps worse, we make it about ourselves.  We make ourselves important people needing to be seen and known as doing great things.  To be visible.  To be prominent.  To always be pictured as someone on the right side of pious.  To be known for being a good person, having the right beliefs, attending the right church, doing the right things, voting correctly, fitting in just squarely.  Associated with the right people.  We have no time for when things get messy or uncomfortable.  We're sticking to our plan.
What would we see if Christians went back to being ordinary people used by God for extraordinary things?
What if we weren't afraid of messy?  Of inconvenient?
Think about it, the Christmas story starts with an all too common scenario that we look down our noses at today.  An unplanned, likely teenage pregnancy.  A rushed and hushed marriage.
Do we really grasp that?  God's plan for Mary's life was going to subject her to lies and slander about her character.  She was going to be known for her lifetime in her hometown as unfaithful.  There would be questions and rumors about exactly who she slept with.  Joseph would likely be looked upon as either the one who couldn't wait or as weak for not exacting his remedy for her unfaithfulness.
God's plan made their lives extremely messy.  It subjected them to the disappointment of their family and friends.  Mary had to know this, she had to be imagining this.  And yet, she said, "let it be."
Are we willing to do the same?
Posted by Mitch at 2:13 PM