Yuletide - The Magi - From Reason to Faith

"Bringing our gifts for the newborn Savior
All that we have, whether costly or meek
Because we believe
Gold for his honor, and frankincense for his pleasure
And myrrh for the cross he will suffer
Do you believe?
Is this who we've waited for?" 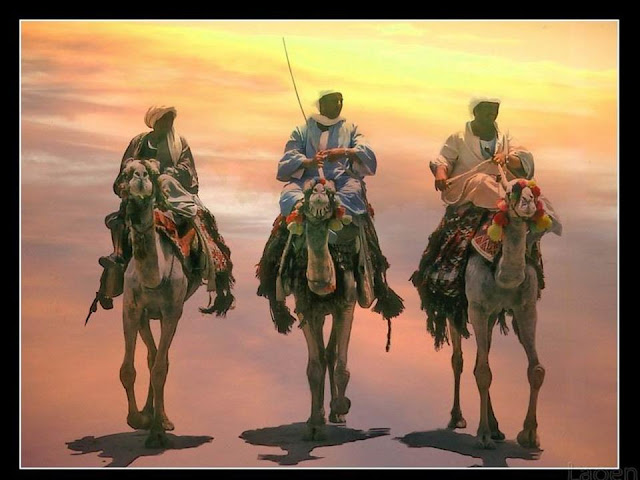 "In the time of King Herod, after Jesus was born in Bethlehem of Judea, wise men from the East came to Jerusalem, asking, "Where is the child who has been born king of the Jews? For we observed his star at its rising, and have come to pay him homage."

When King Herod heard this, he was frightened and all Jerusalem with him; and calling together all the chief priests and scribes of the people, he inquired of them where the Messiah was to be born. They told him, "In Bethlehem of Judea; for so it has been written by the prophet:
'And you, Bethlehem, in the land of Judah, are by no means least among the rulers of Judah; for from you shall come a ruler who is to shepherd my people Israel.'"
Then Herod secretly called for the wise men and learned from them the exact time when the star had appeared. Then he sent them to Bethlehem, saying, "Go and search diligently for the child; and when you have found him, bring me word so that I may also go and pay him homage."
When they had heard the king, they set out; and there, ahead of them, went the star that they had seen at its rising, until it stopped over the place where the child was. When they saw that the star had stopped, they were overwhelmed with joy. On entering the house, they saw the child with Mary his mother; and they knelt down and paid him homage. Then, opening their treasure chests, they offered him gifts of gold, frankincense, and myrrh. And having been warned in a dream not to return to Herod, they left for their own country by another path."
Matthew 2:1-12
Continuing in the biblical story of Jesus's birth, we have to jump for the account of the visit of the Magi.
There are many facts about this encounter that are left unexplained.  First, we don't know exactly when they arrived.  They likely arrived several months after the birth of Jesus.  We don't know exactly how many, but it could be as much as twenty-four months or two years.   So, despite what your nativity scene may show, the Magi were not present at the stable.
Further, we don't know exactly how many Magi traveled to meet the child.  Our songs and some traditions assume three because of the three gifts that they brought.  Other traditions include as many as twelve.
We don't know exactly where they came from.  It is indicated that they came from the East, but there is no further indication of the region.  Many believe they could come from the areas of Persia or even India.
We don't know what they rode. whether camels or donkeys.  We don't know their names, though some are ascribed to them.  We don't know their fates.  We just see their importance in the birth story.
For the Magi represent a common thread in scriptures: the idea of the righteous outsider.
The idea of someone outside the faith, outside the Israelite nation, who saw the power of Almighty God and believed.  Often, especially when the Israelites, the chosen themselves did not see it or believe.
Though the Magi came from another faith, likely Zoroastrianism, they recognized the importance of the signs in the heavens that they witnessed.  They recognized the majesty and wonder of the star and came asking "Where is the child?  Where is the one born King of the Jews?"  The priests, the Levites, the Jewish rulers of the day undoubtedly had see the same star, had seen the same signs in the heavens.  But only the Magi recognized their importance and felt compelled to do something about it.
The Magi, to me, also represent the idea of how wisdom and reason can lead to faith.  Despite the often insistence of Conservative Christianity that science and faith are diametrically opposed, the pursuit of knowledge has been one of the many paths that has led several of our important theological figures to belief.  C.S. Lewis famously turned from atheism to faith through reason.  Several current writers have made their notoriety in making A Case for Christ or stating that they Don't Have Enough Faith to be an Atheist.  People whose pursuit of knowledge, pursuit of wisdom, and intellectual curiosity lead them to Christ.
It's as if in many churches we forget there are Intuitive and Feeling personality types.  We get those who come to Christ through an emotional appeal. Who hear that great conversion story and are moved by it.
We're not sure what to do with those who respond more to facts than to emotions.  Who won't accept easy answers.  Who will question and will push and dig further and further into the historicity of scripture, the battles in church history, canonicity, and translation, and tradition.  Who will challenge the system.
We have to be better equipped to answer both.
The Magi remind us why.  The Magi's knowledge of astronomy and astrology led them to understand the significance of what they saw in the stars.  Their knowledge of other religions led them to understand the importance that this sign meant to the Jewish people.  Their intellectual curiosity spurred them out of their laboratories and studies and into the West to see what would warrant such a display.
In their intelligence, they brought gifts perfectly suited for the new Messiah.  Gold, a gift for a king, for royalty.  Frankincense, a gift for a god, for divinity.  Myrrh,  a gift for the dead, for a sacrifice.  All costly, and all significant.
Oh that we could share in that same wisdom.  In that same curiosity, which pushes us to pursue the Christ child further and further.
And which leads us to share in that exceeding great joy of discovery.
Posted by Mitch at 12:57 PM