"Child in the manger,
Infant of Mary;
Outcast and stranger,
Lord of all;
Child who inherits
All our transgressions,
All our demerits
On Him fall." 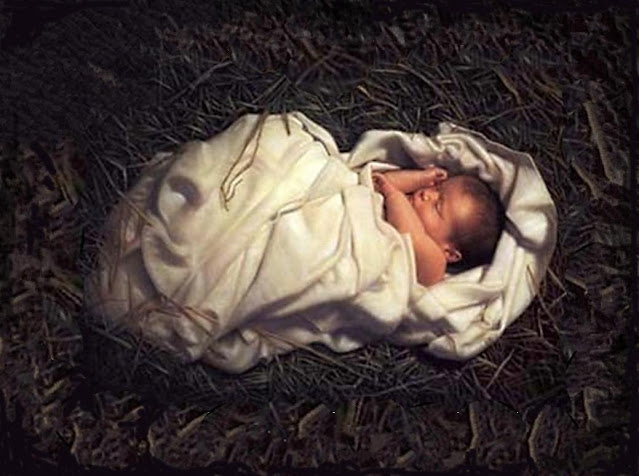 “But when the time had fully come, God sent his Son, born of a woman, born under law, to redeem those under law, that we might receive the full rights of sons.”

There is a tendency in Christianity to downplay the humanity of Jesus.  We know and will say he was "fully human" and "fully God," but in our reading of scripture and description of the events of Jesus life, we'll often shift our focus bad to his divinity, because we know the whole story.  We know the ending, we know the full displays of his power, so it colors our view of his entire life.

We downplay just how human he really was.

The Nativity story should put any such notion to rest.

If Jesus simply arrived on the scene as a fully grown adult and started his ministry, questions of his humanity would be justified.  Mythologies and other religions are rife with gods appearing to men.  In the scriptures themselves, we have heavenly beings appear to men.  Angels and messengers.  If Jesus appeared fully formed, it would be easy to believe he was just an angel or some other heavenly being.

This moves Jesus farther away from us.  As one who cannot relate, but instead as one who has simply come to instruct.  One whose suffering was somehow easier because of his divine ability to endure it.

But by appearing as a child, Jesus assures us of his humanity.

No matter how much we would like to portray his birth as a silent night, or that there was no crying that he made that night, I assure you, Jesus cried as a baby.  It would have been his only way to communicate with his parents.

Yes, he cried, and perhaps hollered and screamed.  He wet himself.  He soiled himself.  He would have vomited.  Made messes.  Worried his human parents.  He got hungry.  Tired.  Frustrated.  Upset.

God Himself stepped down to earth, into a form totally dependent on human parents.  Needing their provision, their protection, their attention.  Unable to do even the simplest tasks for himself.

You can almost imagine the times he would be just like every other child.  And then, something would happen to remind Mary and Joseph of how truly special he was.

We can estimate that the rest of Jesus's childhood and young adulthood would have been similar.  We only have accounts of him as a very young child and then the account of him in the temple, around age twelve.  The rest of his formative years must have been largely uneventful, because when his ministry started, he had no notoriety.  The people who saw him grew up around them asked, "isn't that the carpenter's son?"  And his miracles that began with his ministry seemed surprising and drew attention.

Yes, the infant Jesus reminds us of how much he has in common with all of us.  How he truly can relate to us.  How he knows our struggle, and not just from an outside perspective.  He lived it.

And he lived it because of His compassion for us.  He sees our need and is moved to act.  "For God so loved..."

That's the good news that brings great joy.  That's what causes the angels to rejoice and calls for us to do the same.

Glory to God in the Highest
And on earth, peace

“For we do not have a high priest who is unable to sympathize with our weaknesses, but we have one who has been tempted in every way, just as we are—yet was without sin”

"Once the most holy
Child of salvation
Gently and lowly
Lived below;
Now as our glorious
Mighty Redeemer,
See Him victorious
O'er each foe."
Posted by Mitch at 1:11 PM