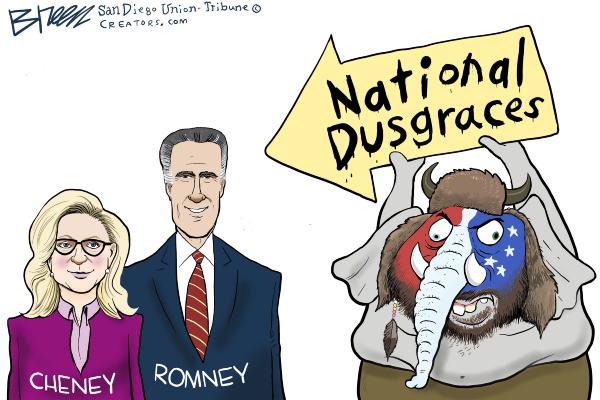 Here lies the Grand Old Party, and all it once stood for. In its place, we recognize the Old Party. And May God have mercy on us all.

Seriously, though, any vestiges of the ideals of the GOP are long gone. The party of Lincoln is now firmly and unalterably the party of Trump. They finalized that switch yesterday with their removal of Liz Cheney from leadership.

In short, they ousted her for having principles.

There used to be an ability or at least a desire to present an educated and principled Conservatism. The air of William F. Buckley and his brand of conservative thought. The ability to debate and spar at the same level as progressives and liberals. The hope to win on thoughts and ideas.

Just look at Marjorie Taylor Greene, the QAnon favorite, accosting Alexandria Ocasio-Cortez in the hallways.  The gloating by Madison Cawthorn on Twitter after the ouster of Cheney.

We don’t have statesmen anymore, we have thugs.

This isn’t surprising; it’s been the trajectory of the party ever since Trump took power. At least, up to this point, there was hope that some of the party was resisting.  That people like McCain, Romney, Cheney, and others were fighting for and speaking for the traditional conservatism. Fighting for the great roots of the party.

It’s clear that fight is now over.

The powers that he have determined that Trump is the only hope for success at the polls. If Biden’s approval numbers are any indication, it would seem they are making a grave error.  And if my suspicions are true, it will take a long time for the Republican Party to recover, if ever.   If they err here, demographics are already turning against them, decreasing the likelihood of any success without a great change in policy.   They know these things and are unwilling to do so.  Hence the perpetuation of the Big Lie and the voter restriction laws they are trying to pass. If you can’t win on principles, you win on technicalities.

Thus begins the slow death of the Old Party.  No longer Grand.  No longer in power.  Appealing to an ever dwindling minority, promising to bring things back to the good old days.