The State of Israel =/= The Nation of Israel 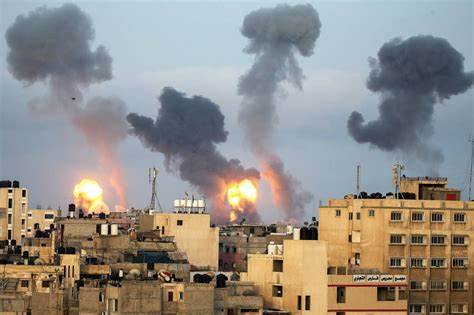 A re-post of a blog from March 14, 2019.  The sentiment needs to be reiterated again, especially in light of the current conflict in Israel.  We would like to think that the government of the modern nation of Israel always acts honorably, but that is not always the case.  Especially, towards its non-Jewish citizens, of which, there are many.  In this particularly incident, Israel barred tens of thousands of Muslims from prayers at the Al Aqsa mosque over the Muslim holy month of Ramadan, a move which drew criticism from all but the most hardline of Israeli leadership.  Israel has also threatened eviction of Palestinian families in the Sheikh Jarrah district, a move which has received the condemnation of the EU, the UN, and the UK governments.  And as tensions and conflict grew as a result of Israeli actions, the Israeli government authorized the use of CS gas and stun grenades in the Al Aqsa mosque on May 10 to help quell the conflict.  Imagine if our police started using tear gas and stun guns in a church here (or think back to when US troops used pepper spray on those at a church so Trump could have a photo op with the Bible).

It's one thing to support Israel.  It's another to blindly allow it to act however it likes.  There are times when we have to call out our allies.  And this is one of them.  The Netanyahu government has been increasingly hostile to a significant portion of the nation's population.  That cannot stand.

If we are going to fully support Israel because of Biblical pretexts, we should expect that they uphold their faith obligations as well.

This is likely not going to be a popular entry, but it's one that needs to be said.  The title should effectively read the current state of Israel does not equal the biblical Nation of Israel.

We can see many instances in which a government is not its people.  Government's can be corrupted, governments can be broken.  Further, the full Nation of Israel is still dispersed across the globe with its people. God's people are in nearly every nation on earth, while the government of Israel is protecting its promised land.

A land that is contentious and controversial.  Leading to need for diplomacy in the area and international relations with the government that are plagued with mine fields.

The United States has had a close relationship with Israel since the recognition of the state of Israel in 1948.  This bilateral relationship is a very important factor in the overall policy in the Middle East and considerable importance has been placed on the maintenance of a close and supportive relationship. This is particularly true among political conservatives and especially heightened by the evangelical influences in the Republican party.  This can be seen in comments like Senator Lindsey Graham's recent "reminder."  "Here's a message for America: Don't ever turn your back on Israel, because God will turn his back on us."

For many, the deep nature of this connection stems from biblical warnings to the enemies of Israel and protections for its allies.

"I will bless those who bless you and whoever curses you I will curse; and all peoples on earth will be blessed through you."

"Pray for the peace of Jerusalem: 'May those who love you be secure.'"

"For the nation or kingdom that will not serve you will perish; it will be utterly ruined."

And while I do not want to suggest that we should not be an ally to Israel or that our relationship should not be maintained, I do think it's time we take a hard look at how that relationship is manifesting in our country.  Because we seem to be getting dangerously close to "Israel can do no wrong."  To a position where any questioning, any criticism, any rebuking, any statement or action against something Israel has done is not tolerated and labeled "anti-Semitic."

We can see it in the discussion after Rand Paul blocked a bill that would send billions of dollars of aid to Israel, though it came from his strict Libertarian position.  "I'm not for foreign aid in general, if we are going to send aid to Israel it should be limited in time and scope so we aren't doing it forever, and it should be paid for by cutting the aid to people who hate Israel and America.  This is a stance I've taken for many years."

Or in the firing of Marc Lamont Hill following a U.N. speech endsoring the boycott, divestment, and sanctions movement against Israel, but closing with the call for a "free Palestine from the river to the sea."  The phrase drew criticism from some conservatives and staunch Israel advocates, who view such remarks as echoing language used by Hamas and other groups that seek to eliminate Israel.  Hill emphatically denies these allegations, and reiterated that while he supports Palestinian freedom, he does not support anti-Semitism, killing Jewish people, or any of the other things attributed to him.  He petitions for the return to pre-1967 borders, to give full rights to Palestinian citizens of Israel, and to allow right of return.  The full rights of Palestinian citizens of Israel in particular will come up later.

More recently, look to the controversy around Representative Ilhan Omar's latest comments on Israel.  While speaking to a bookstore, Rep. Omar suggested that pro-Israel groups were pushing lawmakers to "pledge allegiance to a foreign country."  This led to Congresswoman Nita Lowrey responding in a tweet that "Lawmakers must be able to debate w/o prejudice or bigotry.  I am saddened that Rep. Omar continues to mischaracterize support for Israel.  I urge her to retract this statement and engage in further dialogue with the Jewish community on why these comments are so hurtful."  Omar fired back, "Our democracy is built on debate, Congresswoman!  I should not be expected to have allegiance/pledge support to a foreign country in order to serve my country in Congress or serve on committee.  The people of the 5th elected me to serve their interest.  I am sure we agree on that!"  The exchange resulted in the House shifting their focus to overwhelmingly pass a broad resolution Thursday afternoon, March 7, 2019, to condemn all bigotry.

Rep. Omar's comments, like Hill's, were claimed to draw on anti-Semitic tropes, particularly those that play on Jews hypnotizing the world or running the world behind the scenes.  And while she may need sensitivity training on how to phrase her comments, she does have a point.  We're seeing a pattern where every attempt at a discussion of American-Israeli policy is met with a hard stop.

And we're seeing a need for that discussion in the actions of current Israeli Prime Minister Benjamin Netanyahu.  Netanyahu has tried to rally his religious and nationalist base for re-election by charged accusations that his challengers will form a coalition government with Arab political parties.  This was met with a post by Rotem Sela, one of Israel's top models and TV hosts, stating "What's the problem with the Arabs?  Good heavens, there are also Arab citizens in this country.  When the hell will somebody in the government tell the public that Israel is a state of all its citizens and that all people are born equal?"

To which Netanyahu replied, "I would like to clarify a point that, apparently, is not clear to slightly confused people in the Israeli public."  Israel "is the national state, not of all its citizens, but only of the Jewish people."

There are around 1.8 million Israeli Arabs.  20% of Israel's nearly 9 million citizens.  And its prime minister has just written them off.  It's one thing to say the religious, the biblical Nation of Israel is just Jewish.  That would be correct and as I've stated, reflects the Jewish population across the globe.  But it's true of only about 75% of the citizens of the state of Israel.

And so far, American politicians have been silent. Our president can tweet false claims regarding the co-founder of Greenpeace, fan the claims of anti-Semitism in the Democratic party, and continue to stoke his ego, but nothing about a country clearly disregarding a subset of its population.

This should be concerning even for those believing in the biblical call for supporting Israel.  In our Journey Groups, we have four core values, the final of which is admonishing biblically.  It's a reminder that when you are someone's ally, when you are interested in the growth of a friend or family, you speak up when they are acting inappropriately.

"As for a person who stirs up division, after warning him once and then twice, have nothing more to do with him, knowing that such a person is warped and sinful; he is self-condemned."

Further, we know that historically there were times that even the Nation of Israel "did what was evil in the sight of the Lord."  That there were times they needed to repent and return.  And even if the current government of Israel completely represented the nation of Israel, there would be times where we could not support them.  That we should not support them.  If we are a Christian nation as we claim to be, we should be following the Lord's instructions and speaking up when admonishment is necessary.  To bring our friend to repentance.

Abraham Lincoln believed the political religion of the United States to be liberty.  Liberty and Justice for All.

If we believe in that like we say we do, we have to call out our allies when they infringe on the liberty of their citizens.

Especially when it's not popular.